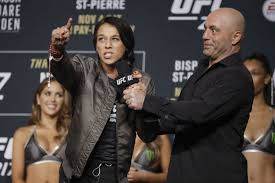 Joanna Jedrzejczyk lost her UFC Straw weight championship as well as her undefeated record to Rose Namajunas in what was hailed as one of the biggest upsets in UFC history. UFC 217 was a night where all three of the champions lost their belts but none was more shocking than Joanna Champion ( as she prefers to be called) losing her title, even with the shocker of Georges St. Pierre choking out Michael Bisping after a four year layoff to win the UFC Middleweight title.
Joanna had a very dominant run in the UFC Straw weight division with 5 title defenses in the division and her losing in such a quick fashion led to comparisons with Ronda Rousey who had lost her belt in a similar fashion. Joanna insists however that the loss of title was due to a botched weight cut which affected her crucially in the fight and not due to underestimating her opponent Rose Namajunas.
I would not have become UFC champion and defended my title five times if I was not respectful for my opponent,I took her very, very serious. She was my big challenge last time, but my weight cut impacted my body. I don’t care if people are going to say if it was my excuse. Only me and my team know what happened that night and how I felt in the octagon.”

Joanna has currently posted on Instagram about her current weight situation with the quote,”If you want something done right…you have to do it yourself.” Implying that she has gotten rid of her nutritionist team and is doing the weight cut herself. This may prove to be a risky strategy but Joanna currently weighs 122.5 lbs which is just 7.5 lbs from her weight.

Joanna’s thoughts on the rematch

Joanna believes that after such a dominant run in the division, she was the only one who deserved a rematch for the title and will definitely regain the title at UFC 223.

It would seen on April 7 whether the change in Joanna’s team would work in her favor against the champion Rose Namajunas.

Previous articleUFC:Leon Edwards shares his desire for a ranked opponent,his respectfull call out of Jorge Masvidal and his thoughts on Till vs Thompson
Next articleBoxing: Deontay Wilder ready to kill a man in the boxing ring