John Dodson, The Ultimate Fighter 14 winner has finally re-signed with the UFC.

Dodson, who last fought and won versus Pedro Munhoz at UFC 222, has signed a new 4-fight contract, as revealed by Ariel Helwani on Twitter. 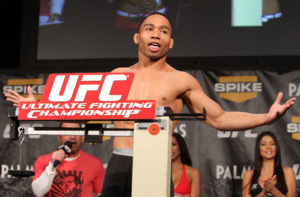 Dodson (20-9) broke onto the UFC scene on TUF 14 and knocked out future and current UFC Bantamweight champion TJ Dillashaw. He previously fought in the Flyweight division and found a lot of success. He was a 2-time title contender in the division, before he eventually moved back to the 135lb division.

Dodson is 3-2 on his return to the UFC Bantamweight division. He is currently ranked 7th in the division after close losses to top contenders John Linekar and Marlon Moraes.

While he has no immediate fights booked, he has revealed that he would like to come back in August.

UFC: CM Punk responds to criticisms about him being part of the main card of UFC 225