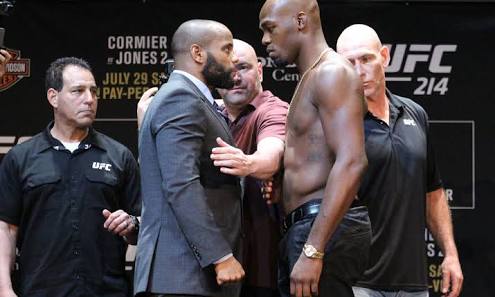 However the foul mouthed bad blood between Jones and his arch rival double champ Daniel Cormier still prevails. Jones was tested positive for the steroid Turinabol in an in-competition drug test before his rematch against Cormier at UFC 214 last year. Jones who defeated Cormier via TKO in the third round, was stripped off the title and Cormier was named as the undisputed champ with immediate effect.

“My deal’s this, I never once said he didn’t win the fight. I’ve never said that. Even when people would tell me ‘no you didn’t get a fair shake, it’s not cool, he cheated’, I said the guy won the fights,” Cormier said. “Cause I’ve always said, I’m sure he’s not the only guy I’ve ever fought who’s on steroids. I’ve always said that. I’ve been very open about that but when you say a pinch of salt — why was the pinch of salt there?”

Jones obviously didn’t go along well with the statements of the double champ as he took to Twitter to reply. (via Twitter):

“Pinch of salt, no pinch of salt. You still had steroids in your system in a fist fight,” Cormier stated. “Not cool.”

Daddys baby still out there whining, What proud “double Champion” just vacates his belt because someone else returns to the sport? 😩

Jones claimed that he believes Conor McGregor was the real double champ and not Cormier. (via Twitter):

Fight me one more time and prove you’re actually the champ champ. I’ll donate $100,000 to a charity in San Diego if you accept. Conor McGregor was an actual double Champ, the whole world knows your claim is a freaking joke. You’re more than welcome to be my first title defense