Former UFC fighter Tyson Griffin (16-8 MMA) took aim at both Conor McGregor and Jon Jones following last weeks Bus attack in Barclays Center, Brooklyn. Ex-UFC fighter commented on the situation on Twitter, comparing the misbehavior of Superstar Conor McGregor to that of Former Undefeated Light Heavyweight Champion Jon Jones who has had his own problems outside of the Octagon 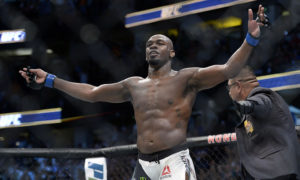 Tyson Griffin chose to get his point across by drawing comparisons between McGregor potentially losing his Burger King endorsement and Jon Jones’ short-lived deal with Nike – Nike and Jones parted ways in 2014 after he was involved in a brawl with Daniel Cormier at a press conference.

Tyson posted a tweet out saying,“Well there goes @TheNotoriousMMA losing his @BurgerKing deal faster than @JonnyBones lost his @Nike deal!! Or did he?? More $ more problems.”

Well there goes @TheNotoriousMMA lossing his @BurgerKing deal faster than @JonnyBones lost his @Nike deal!! Or did he?? More💰more problems 🧐🤔

Tyson Griffin’s comment didn’t sit well with Jon Jones and even though Jon Jones doesn’t use social media all that often, Jones fired back on Tyson with his series of Tweets:

@TysonGriffin my dream was to be sponsored by Nike as a high school wrestler, became an adult and made it happen. Even had my own sneaker which sold out within a day.

@TysonGriffin You can tell by the tone of your tweet that you’re happy Connor may be losing his deal. Disguise yourself as an MMA coach or a MMA personality, I just see a bitter bitch who’s the size of my dick

That prompted Griffin to leak more of their conversation, where “Bones” revealed his net worth which is reportedly about $8 Million and ended the conversation by asking why the veteran lightweight competitor was trying so desperately to get his attention.

2 years ago I kept this private because I almost felt bad for @JonnyBones but now I’ll just let you all judge for yourselves. pic.twitter.com/s4eZfv8M25

Jon Jones immediately fired back at Tyson Griffin with another War of Tweets:

@TysonGriffin It’s hilarious that you reposted our private messages, I meant every word I said. At first I thought your hatred was DC related but now I’m starting to think you are just an envious little bastard.

@TysonGriffin At the end of the day, I’m not going to lie, it’s pretty fun shitting on you. Just because I’m the bigger man doesn’t mean I have to sit back be quiet and listen to your cyber attack.

@TysonGriffin hope this has gained you a few more followers. I’m sure you were reply to my last message. Be quiet for a while and come out with more hatred in a few more months. It’s your pattern. You’re cute, my little pet 😘

@TysonGriffin last thing, don’t call me brother. My brothers are over 6 feet and champions… Hitting me with that soft shit after getting verbally body bagged. Stop throwing tomatoes from the sidelines bro, you’re whack

The beef between Tyson Griffin and Jon Jones which dates back to 2014 doesn’t seem to be coming to an end.