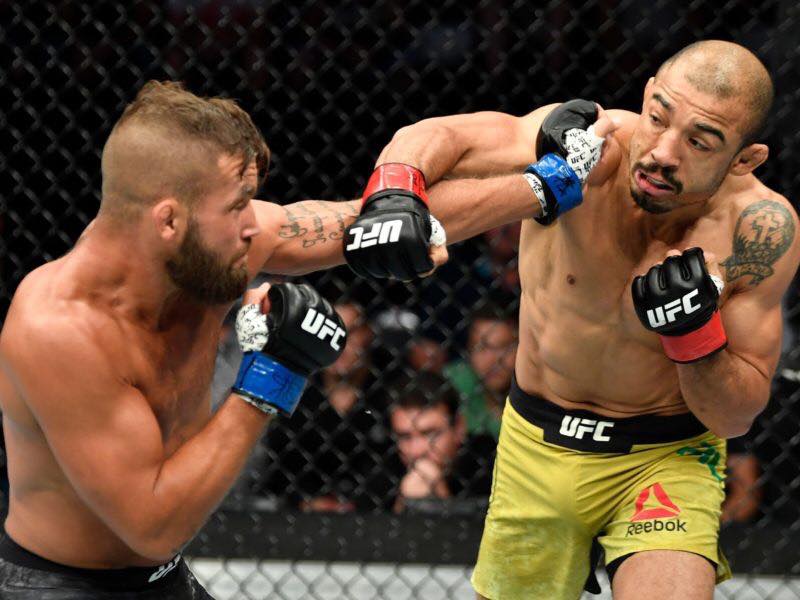 At one point in time, it seemed as if Jose Aldo, to put it into much simpler terms, just couldn’t be defeated. However, time catches up with even the greatest of champions and Aldo is no exception. When Mcgregor snapped Aldo’s winning streak with the left hook on Aldo’s chin, many were of the school of thought that Aldo would never be the same fighter again.

And the line of thought even proved to be correct when Max Holloway defeated Aldo for the belt, not once but twice. However, Aldo proved at Calgary that he still has what it takes to knock out one of the best knockout artists in the lightweight division when he knocked Jeremy Stephens with a brutal body shot. 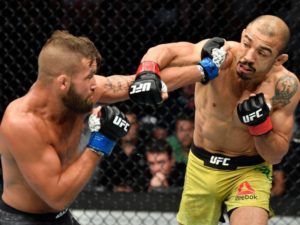 During a media scrum in Brazil, Aldo said:

“Right after the (Jeremy Stephens) fight, Dana talked about the big possibility of fighting on Dec. 8, in Canada again. I’ve had already asked for that fight, I said I wanted to be on that event. I really enjoyed fighting in Canada, where I made my UFC debut, and I hope to fight there again. It’s up to ‘Dede’ now, he’s looking into that and talking to Dana and Sean to get my next fight done.”

“That fight between Holloway and Brian is booked, and I hope it happens. I hope Max is okay and can put on a great fight and let the division move. To me, I don’t care if it’s at featherweight or lightweight, what matters is fighting at that card. I had already asked for it before that fight was booked, so for me it’s great because we know that if anything happens, we can fight for the belt, so I will get ready. No matter the weight, 145 or 155, I’ve earned a title.”

“I can’t say there’s an ideal guy at featherweight because they’re all behind me, they are all trying to promote themselves to get to a title fight, and they all know I’m ahead of them. Especially if Brian wins, if he wins there’s no other option. That’s what we’re waiting for. There’s no reason for me to fight (them) now. In the future, yes, I want to fight them all because that’s how I have always was, fighting the best. If they are the best, I want to fight the best.”

Jose Aldo is the longest reigning featherweight champion in the history of UFC.

UFC: Max Holloway says he’s cleared to fight but nothing finalized yet for UFC 231