UFC: Karolina Kowalkiewicz looking for a bonus against Felice Herrig 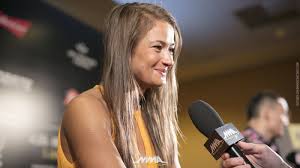 Karolina Kowalkiewicz has an unique motivation to win at UFC 223 against Felice Herrig – shopping spree. Karolina fighting on 7th April in Brooklyn, New York has had too much fun shopping and will need a $50,000 bonus to get her finances in order.“I love New York,” Kowalkiewicz said. “I love shopping, and I spent too much money. I need a bonus to pay off my credit cards.” Kowalkiewicz is headlining the Fox Sports 1 prelims alongside Felice Herrig in the featured bout before the pay per view. 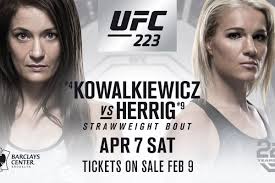 Karolina on her present focus

The former title challenger and #4 ranked contender intends to win the title in the near future and with a past win over the current champion Rose Namajunas, Karolina believes a title shot may be on the horizon but her focus is completely on Felice Herrig for now.

“My biggest dream is to fight for the belt once again,” Kowalkiewicz said. “But right now I’m only focused on Felice, and my biggest goal is win this fight. After this fight I want to have new goals.”

The #8 ranked Felice Herrig owns the longest active winning streak in the UFC Straw Weight division and Karolina is not taking her lightly. “She’s a great fighter,” Kowalkiewicz said. “Very complete fighter. She made big progress, and she’s physically very, very strong. I can’t wait to fight with her. … There can only be one winner, and it will be me. I hope so.”

Previous articleBoxing: GGG vs Saunders in talks for the fall
Next articleUFC 223 Embedded: Vlog Series – Episode 4