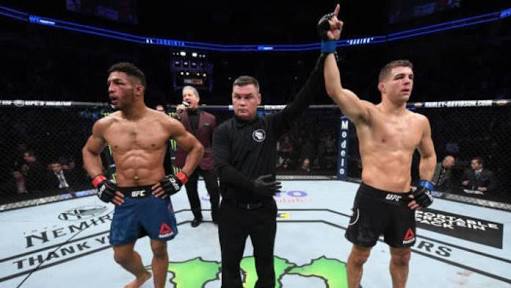 Iaquinta went in a fairly heavy underdog against Lee however managed to get the job done winning three rounds on two scorecards and four rounds on one. Following the event, a speechless and disappointed Kevin Lee expressed his resentment speaking with a group of reporters.

“Devastated, embarrassed,” Lee told reporters. “This sport sometimes has the lowest of lows, and it really don’t feel lower than now, but I’ll be all right. I might not get another shot at Al, but I’ve fought a lot of great fighters in my career, and he’s definitely up there amongst them. We’ll see once everything gets settled down.”

Iaquinta came out creative in the first round landing good shots including a spinning elbow. Contrary to his style, Iaquinta also attempted few takedowns on Lee. Lee established some rhythm in the second and third round having Iaquinta in a body triangle but unable to sink in a rear naked choke. In the fourth and fifth rounds however Iaquinta picked up immense pace and hurt Lee pretty badly with good shots like a left hook and a head kick.

Lee however accepted the defeat like a man and claimed small ‘tactical’ errors costed him the fight.

“I think I let the mind games play into me a little bit, but honestly I can’t make no excuses,” Lee said. “I had a great camp. It was a great cut. Everything felt on fire tonight. The first three rounds I thought for sure I had them. Then I just took my foot off the gas. Those are just tactical mistakes that a guy like me shouldn’t be making, and I couldn’t be more disappointed in myself for it.”

Previous articleUFC: Dana White: Al Iaquinta should be ranked higher
Next articleUFC: Zabit Magomedsharipov vs Jeremy Stephens in the (fire)works for UFC 235