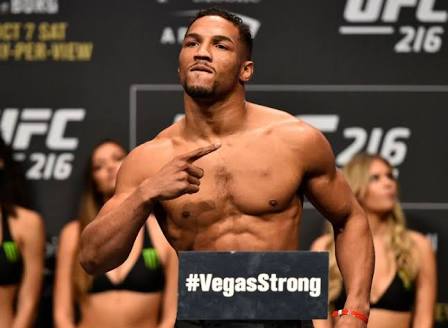 ‘The MoTown Phenom’ is known not only for his accomplishments inside the octagon but also for his promotional talk outside the octagon as he takes a dig at newly crowned champion Khabib Nurmagomedov.

“You’ve got Khabib running around with this title, and that was the deal with it,” said Lee. “He’s feeling himself and he’s still got that imaginary ‘0’ and my motivation is to give him that ‘1’ and I hope he doesn’t run into anybody who’s gonna do it before me.”

“Once I get my hands on Khabib…I can’t wait for it and I think this fight is gonna show it,” he said. “I feel like I’m gonna fight a better version of Edson Barboza. He’s never lost two in a row, and every fight that he lost, when he comes back he’s always stronger and always better, and I’m expecting that. But I’m gonna beat Edson worse than Khabib.”

Last time when the talented lightweight fought in New Jersey was four years ago on his debut. He faced a tuff challenge for a debut against native Al Iaquinta. He lost the bout via unanimous decision. There are definitely a bit of nerves coming into this fight for Lee.

“There’s a little bit of that, especially when I’m fighting somebody like Edson Barboza,” he said. “You look at the man and he’s incredible. He’s a human highlight reel. So I’ve got even more of that fire to get it done in a better way than the last time I was in Jersey. And it’s a different approach. The first time I was in there, that was my first fight in the UFC and my first experience of being at that level. Now I’ve been in the big shows, I’ve fought in the biggest venue and headlined that venue, so now I get to see the other side and I’m excited for that.”

It’ hard to believe that Lee is only 25 years of age, especially with respect to the fact that he got a shot at UFC’s interim lightweight title against Tony Ferguson. Lee was doing exceptional until he got caught in a triangle choke at the end of the third round. He would love to bounce back from this setback.

“It’s all about experience in there,” Lee said. “You can say it as much as you want before the fight, but it is different when you’re going out there and headlining a Pay-Per-View for a world title and you don’t have that experience already. Now that I have that and I understand how to calm my mind down, I know it’s all mental. I think I’m already one of the best athletes in this division. Once I bring that mental aspect up, and that’s been a big focus in this camp, I’m gonna be unstoppable. So I get a lot of confidence out of knowing that, and once I go out there and prove that and show that my mental side is as strong as my physical, there’s not a man in this division that can stop me.”
Read also:
https://www.mmaindia.com/ufc-kevin-lee-misses-weight-atlantic-city-main-event/
https://www.mmaindia.com/ufc-jim-miller-looks-take-frustrations-atlantic-city-dan-hooker/