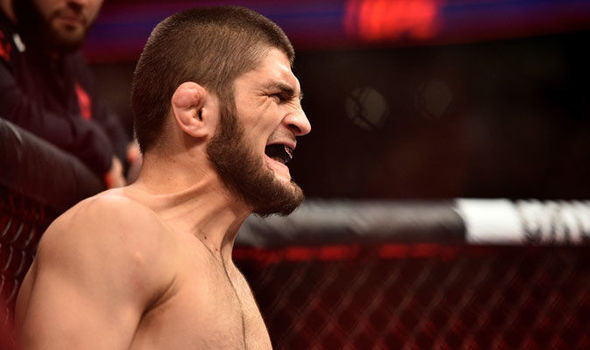 UFC Lightweight contender Khabib Nurmagomedov who will be fighting Max Holloway for the Undisputed Lightweight Championship this Saturday at UFC 223 has anything but the fight on his mind right about now.

Speaking to Ariel Helwani of MMA Fighting, Khabib took some time to address Conor McGregor’s actions yesterday at the Barclay’s center in Brooklyn.

For those of you who aren’t yet up to speed ,it is reported that following the UFC 223 media day, Conor McGregor stormed the Barclay’s center with around 20 of his friends and accosted a bus that also contained Khabib among many other fighters.

McGregor then threw a dolly at the bus which shattered a glass window, resulting in multiple lacerations for Michael Chiesa and eye-related problems for Ray Borg, both of whom were pulled from the UFC 223 card for their injuries.

Speaking of the incident, Khabib had this to say:

I am laughing inside. “You broke window? Why? Come inside. You know UFC don’t let you come inside.

If you real gangster why don’t you come inside?

This is big history gangster place. Brooklyn. You want to talk to me? Send me location. We have to talk? I am gonna come, no problem.

I grew up like this. I don’t grow up throwing chairs at window. This is not my bus.

It is rumoured that Conor McGregor only attacked the bus in search for Khabib Nurmagomedov, who had accosted and slapped Conor’s teammate and sparring partner Artem Lobov in the hotel lobby yesterday.

I give his whole team slap and no one say anything. He come with media, with cameras when I’m alone. Of course I want to go outside but they don’t let me leave the bus. He knows this.

This is not my team bus, this is red corner bus. My whole team wasn’t with me. It was just me, Ali Abdelaziz and a cornerman, Muhammed. The whole red corner was on the bus. Rose Namajunas, Al Iaquinta, Karolina Kowalkiewicz, Ray Borg.

It was also reported that Conor McGregor surrendered himself to the NYPD later in the day. He is expected to face multiple charges.