UFC: Khabib Nurmagomedov and Tony Ferguson engage in war of words before UFC 223 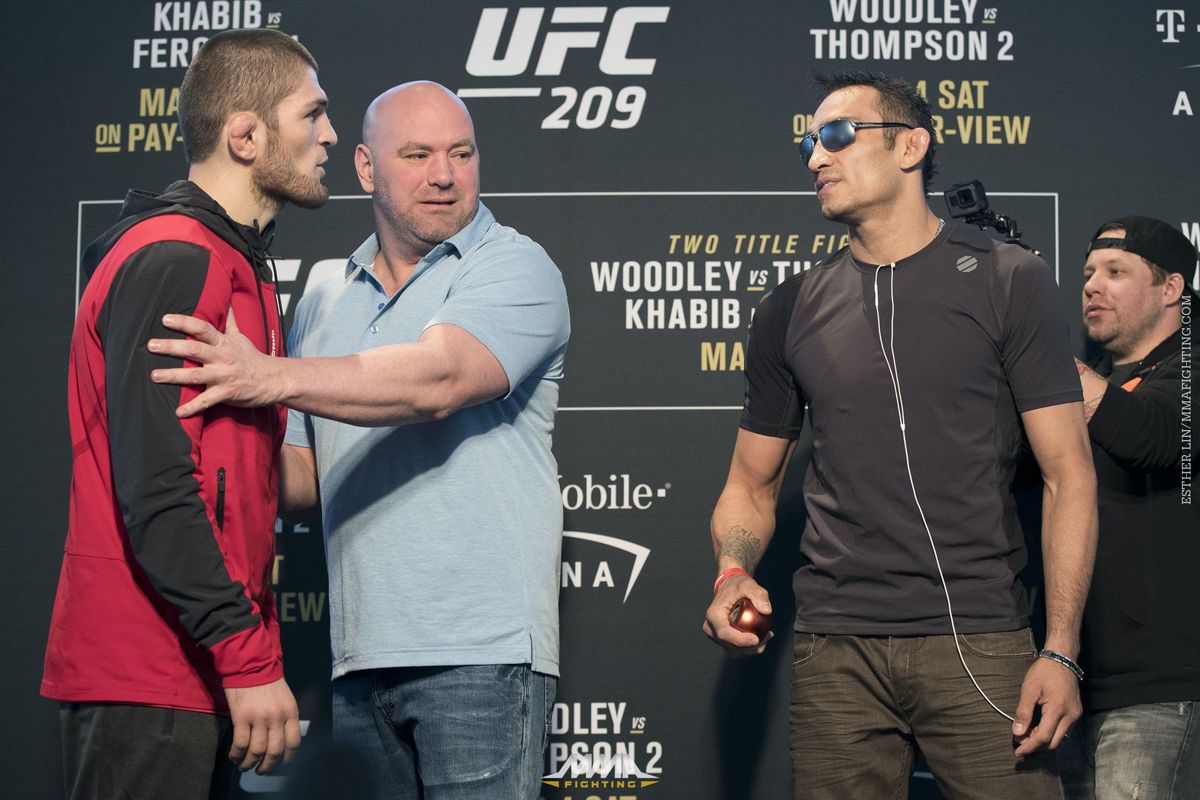 Ahead of their high-profile showdown at UFC 223, Khabib Nurmagomedov and Tony Ferguson engaged in a heated war of words during last day’s UFC 223 Media call.

Both the fighters were spewing out insults at each other and the call ended up being an entertaining one as a result. Ferguson and Khabib touched almost all the topics out there ahead of the fight and there were some interesting highlights as well.

Khabib was mostly talking about Ferguson’s belt being a ‘fake’ one and came up with a string of quotes around this.

Ferguson hit back with a shot of his own and dragged Reebok into the mix.

“Fake belt? That sh*t looks real to me. It’s shiny. You’ve got the fake belt because everybody hands ‘em to you. All those belts that you’ve got, and people floating your boat and this Reebok sponsorships, that’s the sh*t I don’t give a f*ck about. And that’s one thing that you’ve got me wrong.” Ferguson replied.

The reply from Khabib turned out to be a fun one as the Russian offered to buy Ferguson a Reebok shoe.

“Now you talk about Reebok, hey? Because these guys don’t give you contract and now you jealous too? I can ask Reebok to give you contract if you want. Tony, Reebok, they make very good shoe now. We can order you one. What size you have? What size you have, please? Need to know. Like nine, 10? I can order for you. … They can make you shoes, put like ‘Interim Lightweight Champ, Tony Ferguson.’ You want this?” Khabib said.

I can smell it through the phone

Prior to getting into the conversation mentioned above, Ferguson dropped a quote about Khabib being nervous as you can below.

The interim champion also had an insult about Khabib’s eating habits.

“ He’s a (expletive) cake eater. He’s a silver-spoon fed cake-eater. And I’m about to take that spoon from him and beat him over the head with that (expletive),” Ferguson said. (H/T MMA Junkie).

Khabib meanwhile was sticking to the stats from the Octagon and touched upon the fact that Tony is prone to getting knocked down.

“ Seven times, somebody give you a knockdown in your UFC career. Seven times you go down. I’m going to knock you out, you understand?” he added.

These are just some of the quotes from the chaotic conference call and you can hear the complete call below.

Nevertheless, the call has done enough to increase the hype surrounding UFC 223 and it would be interesting to see who comes out on top at the event.