Talking to the Anatomy of a Fighter reality series on YouTube, Khabib explained his position. 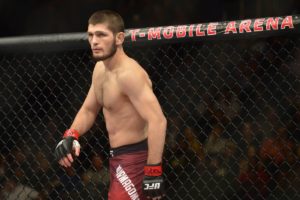 “If not Conor, if not GSP, I think Alvarez vs. Poirier, I think the winner deserves a title shot,” Khabib told Anatomy of a Fighter recently.

He also revealed that he is still holding his breath for a future fight with long term rival Tony Ferguson.

“He just had surgery. If he can, why not? Tony Ferguson is biggest match-up for me. This match what I want, what people want, what fans want but I don’t know about his healthy.”

“If he’s ready, let’s go. Why not? I’m ready for September, I’m ready for October, I’m training all the time. I’m here to defend my title.”

“If the UFC gives me any opponent, I’m ready for this, to beat this guy.”

Khabib, however would like to take the fight the whole MMA world wants to see.

“Khabib vs. Conor, country vs. country, fans vs. fans. It’s gonna be very big, one of the biggest – I think biggest match-up in UFC history, me versus Conor.”

“Without bus, without other things, we just have to fight but I don’t think the UFC can make the decision about this fight.”

“About this fight, I think only Conor can make this decision. If he wants to lose and make money, he has to say yes and sign this contract and come back because people forget about when he fought last time.”

Khabib is rumored to return in September or October – his opponent however is yet to be known.