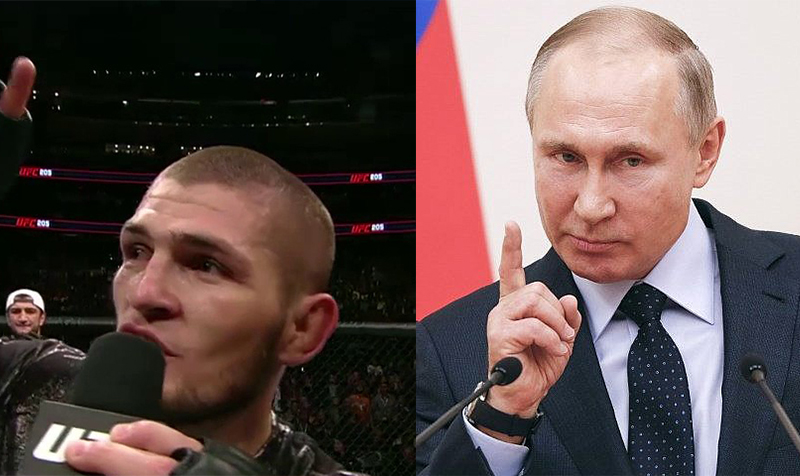 Khabib Nurmagomedov was crowned the UFC undisputed lightweight champion at UFC 223 on Saturday night. He dominated short notice challenger Al Iquainta from bell to bell and this subsequently stripped Conor Mcgregor and Tony Ferguson of their UFC lightweight and interim titles. Khabib had a lot to say during his post-fight speech, from thanking every one of his team individually to calling out former UFC WW and MW champion Georges St.Pierre. There was one thing though the western media did not pick up on – Khabib calling out Russian President Vladimir Putin for a favor. 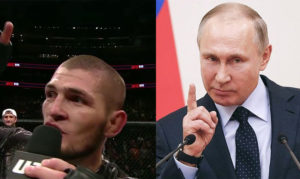 Khabib ‘The Eagle’ Nurmagomedov – while he prepares for his fights at AKA in San Diego, USA, spends his off-season training at Eagles MMA, Moscow. He is the current president of the MMA club that was founded in 2016. Ziyavudin Magomedov, a Russian billionaire, who is also an avid sports enthusiast, is the co-owner of Eagles MMA. He was arrested on March 31, 2018 on charges of “racketeering and embezzlement of state funds” by the Ministry of Internal Affairs of Russia. Khabib, who is known to be very loyal to his friends didn’t miss the opportunity to ask the Russian President for some help during the biggest moment of his professional career. Khabib spoke in his native Russian and refused to translate. Here is a roughly translated version of Khabib’s speech in Russian.

”Our elder brother, co-owner of our team Ziyavudin Magomedov, is in a difficult situation,” Khabib said in Russian during his UFC 223 post fight speech. “He was very helpful to me and other athletes from Russia. Now he has problems, but I want him to know that we, the athletes, are praying for him. I believe that this situation will soon be resolved. I hope that our leader Vladimir Putin will help him. I want to congratulate him on the victory in the last election.”

“It is a little bit hard for me. I talk about my big brother, Ziyavudin Magomedov. I want to wish him good luck.”

Ziyavudin Madomedov, a native of Dagestan is the owner of the Summa Group, a holding company that has interests in port logistics, construction, and oil and gas. Ziyavudin is also an avid sports fan. He is the chairman of the board of trustees at the Russian Tennis Federation and has invested millions into MMA in the country. He owns Fight Nights Global, one of the biggest promotions in the country, which has featured the likes of Fedor Emelianenko, the greatest mixed martial artist of all time according to many. He is also the owner of Eagles MMA gym, where Khabib trains out off and sits as president.

Magomedov, whose wealth peaked at 3 billion (Forbes) during Dmitry Medvedev’s presidency (2008-2012), has been caught in the middle of the power struggle and reshuffle at the top of the Russian hierarchy. Magomedov has slowly seen a sharp decline in his wealth ever since Vladimir Putin took over office in 2012. Things worsened on March 31 ,2018, when he and his brother Magomed Magomedov were arrested on charges involving money embezzlement in relation to a construction project of a World Cup football stadium at Kaliningrad. Magomedov has denied all charges but was declined a 35-million USD bail plea, and will have now face charges in court on May 31, 2018.

It is rumored that Magomedov has been arrested due to some of Igor Sechin’s business interests. Sechin, the executive chairman of Rosneft(Russian state oil company) is a close ally of Vladimir Putin and is considered the ‘de facto’ deputy to him. Some reports suggested that Sechin was interested in the Novorossiysk Port, owned by the Summa group and could be a possible link in the Magomedov’s arrest. However, as far as MMA is concerned, it is widely known of Ziyavudin Magomedov’s efforts to make MMA a household sport in Russia and this arrest has left many fighters in sadness. Khabib, the face of Russian MMA, being the most recent to raise a plea to the Russian Government. We will have to wait until May 31, 2018 to know more about the fate of Magomedov.

UFC: Khabib Nurmagomedov comes out in support for his friend