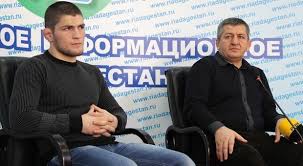 The much anticipated Ferguson vs Nurmagomedov fight at UFC 223 has been called off yet again, due to an injury to Tony Ferguson. The fight which was for the UFC Lightweight Championship has been canceled for an unprecedented fourth time and many people now believe that the fight is cursed. Dana White also declared that he will never make this fight again but Khabib’s camp believes that this fight will happen sometime in the future.

Khabib’s father on the fight against Ferguson in the future

Khabib’s father and longtime coach Abdulmanap Nurmagomedov talked about the fight happening in the future.

“As long as Ferguson is able to walk, we’ll demand this fight,” the coach told TASS on Monday.

“We’re ready to fight with him any time and under any circumstances. We’re wishing him to get well, and waiting for him,”he added.

Khabib also expressed his views in an interview with Ariel Helwani on MMA Hour, stating that the fight was inevitable if Tony Ferguson and Khabib both kept winning their respective fights.

UFC succeeded in finding a short nootice oponent for Khabib Nurmagomedov on 7th of April , who is none other than Max ‘Blessed’ Holloway, the UFC Featherweight Champion who will move up a weight class for a chance at the UFC Lightweight Championship. Abdulmanap Nurmagomedov spoke highly of Khabib’s new opponent.

“He’s a very dangerous opponent, who dropped Jose Aldo in his last bout. He’s very fast and a smart fighter, so this is going to be a very interesting fight. I think Holloway is not any less interesting than Ferguson.”

Holloway recently pulled out of a fight with Frankie Edgar at UFC 222 due to a foot injury but has accepted the replacement role less than a month after the event. It remains to be seen whether Holloway would be able to perform at 100% capacity against a very dangerous opponent although Holloway has a chance to become the simultaneous Lightweight and Featherweight Champion if the risk pays off.