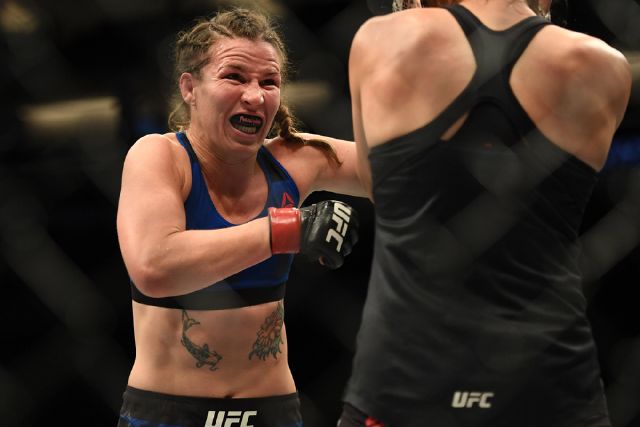 UFC fighter Leslie Smith is actively pushing the fighter unionization efforts with Project Spearhead. The Bantamweight star managed to create a lot of buzz with the initiative and she is showing no signs of slowing down.

Today, Smith posted an interesting stat on her Twitter page. In the post, Smith explained how the players from other major sports leagues enjoy benefits from television deals.

Smith pointed out the case of NBA in particular and mentioned that the almost 50 percent of the money from NBA’s television deal goes to the athletes.

According to the stat posted by Smith, NBA has a $24 Billion deal with ABC, ESPN, and TNT and if Leslie’s statement is indeed true, the players would be getting around $12 Billion from just the television deal.

UFC fighters do not get a percentage of the tv deals. The picture shows how much the other major televised sports are getting in tv deals. The NBA Players Association made 50% of the NBA's TV $ go to the athletes. Imagine how much more ufc athletes could make! pic.twitter.com/JMjygUnHxQ

Next step for Smith

Smith (10-7) will be fighting Aspen Ladd next in April. She will be heading into the fight on the back of two wins she picked up against Amanda Lemos and Irene Aldana respectively. The fight against Ladd will also be the last fight on Smith’s current UFC contract. Although there is a concern about the negotiations due to Smith’s association with Project Spearhead, she remained confident about landing a good deal.

“My contract right now is for $31k/$31k. And that’s gonna be another obstacle because, at this point, it will not be worth it for me to re-sign for $33k/$33k or something like that. It’s gonna have to be at least $100k (to show with no win bonus), and that’s probably the lowest that I’m gonna go — we’ll probably start at $250k. I am a very exciting fighter; people really like to watch me fight. I bring it every time, I make weight, but I’m not gonna sign myself away for less than what I feel I’m worth.” She said in an interview with Bloody Elbow last week.

Previous articleMMA Roundup: Who said what? (3/1/2018)
Next articleBoxing: Indian team for the 2018 Commonwealth games announced