UFC lightweight Edson Barboza has announced that he will be dropping down to featherweight division for his upcoming fights. The move comes following his loss to Paul Felder at UFC 242. 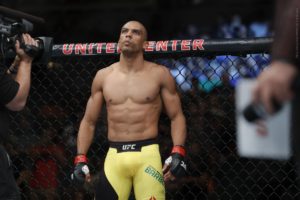 “The move to 145, provided he feels good, opens a lot of opportunity for him,” Davis told MMA Junkie in a recent interview. “I’m really more of a fan of seeing guys go up in weight than down. I’ve been more successful like that, for example with Thiago Santos. But in Edson’s case, he actually has a harder time staying heavy than he does dropping weight. I think that the way he sits in the 155 division, it makes sense for him to try 145. I think that after what (Jose) Aldo did, I personally did not think Aldo was going to look good at all, but we were all proved wrong. I think that Edson deserves the opportunity to try 145. I think there’s a lot of great fights there for him. The whole team, the coaches think he’s going to look fine. And he’s really, really excited.”

Barboza who turns 34 later this month has competed at the lightweight division for the entirety of his career. He currently trains at American Top Team and his manager Alex Davis said that his team will make sure that Barboza safely makes the featherweight limits.

“He has a really good strength and conditioning coach, Phil Daru,” Davis said. “All the team likes the idea. I’m not the biggest fan of the whole weight system, but in this case, I give my blessing. I think, provided he does everything correctly, and he gets there healthy, it’s going to be a problem for the division.”

“If you look at the 155 division and the fights that are there for him, he’s fought everybody,” Davis said. “For his name and his career and his legacy, the drop to 145 gives an opportunity for a fresh start. We like all the fights in that division. We’re not going to be picking opponents. Whoever they tell us, we’re going to go against them.”

What do you guys think about Edson Barboza’s recent career move?