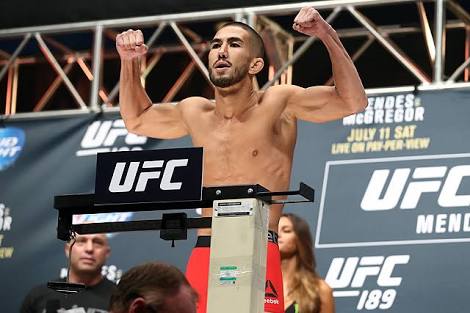 As the saying goes, ‘Comebacks- are difficult than debuts’. A familiar face will be making an emotional walk towards the octagon as Louis ‘The Last Samurai’ Smolka has been re-signed by the UFC.

The Hawaiian has his first assignment as well as his comeback will be a short notice fight against Sumudaerji Sumudaerji (10-2) in a bantamweight bout at UFC Fight Night 141 in Beijing, China on November 24.

Everything seemed to be firing all cylinders for Smolka who had a decent 5-1 record at flyweight coming of the main event victory in enemy territory followed by a highlight reel knockout. However, that’s where the bitter arrived as Smolka was reduced to a four-fight losing streak eventually getting the cut.

Smolka, however, gathered the ropes and went to the drawing board meaning the regional circuit. Smolka compiled a three-fight winning streak all being impressive finishes which made his re-signing inevitable.

“They told me to do two fights then I’ll get back in and I ended up having a third,” Smolka told MMAjunkie. “I was just kind of getting worried that it wasn’t going to happen. I was getting worried because it was taking a while, but it worked out because it’s something that I’ve wanted to do for a long time is move up in weight. Weight cuts are pretty bad for me. I cut carbs out like two weeks out and every time I’ve had to make the weight it’s been pretty brutal. I’m happy to be done with that.”

Smolka, however, believes a victory is extremely necessary for his quest to continue fighting under the UFC banner.

Previous articleUFC: Neil Magny invites fan to grapple with him during open workouts
Next articleChael Sonnen relates a funny story of how Anderson Silva fight came about