Luke Rockhold’s fortunes outside the Octagon seem to be better than the ones inside it, of late.

Despite getting brutally knocked out by  Yoel Romero at UFC 221, Luke Rockhold doesn’t seem to have missed a beat in advancing his modelling career as he was announced as the new face of the Polo Blue fragrance by Ralph Lauren earlier today, reports MMA Fighting. 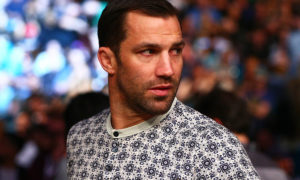 Rockhold, who is signed on with Soul Artist Management, has also been focussing more on his modelling career these past 2 years to go with being one of the top contenders in the UFC Middleweight division.

However, there has been talk, especially after the loss to Yoel Romero, that he is looking to go up in weight to contest in the UFC Lightweight division next.

With Champion of the division and fellow American Kickboxing Academy product Daniel Cormier slated to fight Heavyweight Champion Stipe Miocic in July, this also gives Rockhold the perfect opportunity to move up in weight and try his hand at 205 pounds.

Do you think Rockhold has it in him to be a Champion in the UFC again?

Previous articleUFC News: Bharat Kandare is on his way back to the UFC!
Next articleBellator News: Chael Sonnen calls out Chuck Liddell, big announcement expected soon