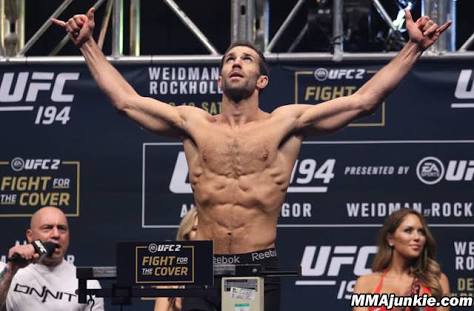 Luke Rockhold is planning a move to the light heavyweight division.

Luke Rockhold (16-4),two weeks ago suffered a TKO loss to Yoel Romero at UFC 221 in Perth, Australia. A win would have netted him an interim championship and set up a title unification bout against Robert Whittaker.

With that off the table, however, Rockhold doesn’t see much left at 185 pounds. Outside of a trilogy bout with rival Michael Bisping, Rockhold’s focus is already shifting to 205.

“I’m not too excited about making that weight cut again,” Rockhold told ESPN. “I just don’t feel nearly as strong, powerful, quick. It takes a lot out of me.

“Pretty much Bisping is the only reason I would torture myself to get back there. That’s a loss that doesn’t sit well with me. I know the UFC is very interested in that fight and will pursue it on their end. If he doesn’t accept it, there’s no reason for me to stay at 185.”

Rockhold won the UFC championship in 2015 beating Chris Weidman via TKO, then was slated to fight Weidman again at UFC 199. However Weidman pulled out from the fight and was replaced by Michael Bisping (30-9), who Rockhold suffered a stunning knockout loss against in the fight.

Their rivalry sits at one win apiece, but Bisping is considering retirement after suffering back-to-back losses last year.

Rockhold’s entire career has taken place at middleweight, but the cut has never been an easy one. He says his natural weight is around 210 pounds.He further said,”Compared to some other guys at 205, of course, I’ll be a little small.

But I’ve never tried to just physically go for it, bulk up, lift weights. Every time I’m in training mode, I’ve had to monitor what I’m eating. I’ll break 210 and be around 215 pounds. I know what it takes to compete with the best guys at 205. I’ve trained with them.”

Alexander Gustafsson has already called him out and Rockhold says that this fight interests him. In August 2017, former Middleweight Champion Chris Weidman also considered moving to the Light Heavyweight Division.

A rematch between them would also be interesting.