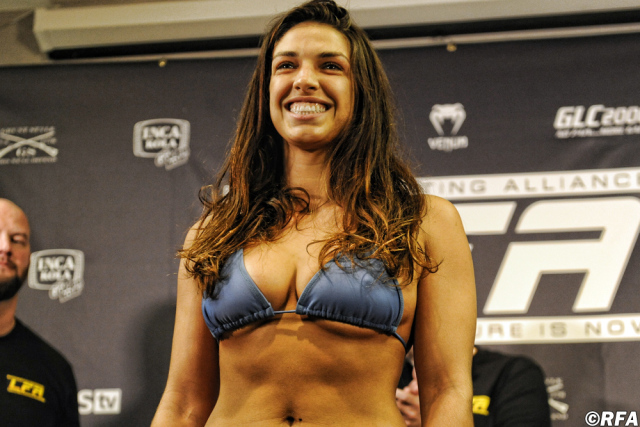 Brazilian prospect Mackenzie Dern is set to make a quick return to the cage as she is set to fight at UFC 224 in Rio. Dern will be facing Amanda Cooper at the event which takes place on May 12, 2018,

Dern made her UFC debut earlier this month at UFC 222 when she faced Ashley Yoder. The 24-year-old managed to come out with a split decision victory at the event and had expressed her desire to fight soon during the post-fight press conference.

Amanda Cooper, meanwhile, got a second-round TKO win over Angela Magana in her last fight at UFC 218. With a professional record of 3-3, Cooper has been on a rollercoaster ride with two wins and two losses since she moved to UFC from Invicta fighting championship.

“I’ve been training to beat [Dern] longer than you can imagine. I’m going to derail the hype train on May 12th.” Cooper noted on Instagram.

Dern is undefeated in her professional MMA career and will be looking to improve her record to 7-0 when she fights Cooper next. Prior to her win against Yoder, Dern defeated Kaline Medeiros in Invicta Fighting championship.

Other fights on the card

The UFC 224 card is expected to be headlined by the UFC Women’s Bantamweight championship fight between Amanda Nunes and Raquel Pennington. Though there were rumors about a Nunes vs. Cris Cyborg matchup, UFC decided to go ahead with Pennington.

Lyoto Machida vs. Vitor Belfort will be another major attraction on the card. It will also be the retirement fight of Vitor Belfort.

A middleweight bout between Ronaldo Souza and Kelvin Gastelum is also booked for the pay-per-view. Both Souza and Gastelum secured wins in their last fights with Gastelum stopping Micheal Bisping at UFC Shanghai when Souza outclassed Derek Brunson at UFC on Fox 27.