UFC: Marc Diakiese feels his UFC Hamburg opponent Nasrat Haqparast does not deserve to be in the UFC

In the opening fight of the main-card of UFC Fight Night 134, Marc Diakiese will take on relative promotional new-comer Nasrat Haqparast. There has been some heated exchanges between the two and the duo are eager to trade blows. Even at the ceremonial weigh-ins, the two fighters had a heated confrontation. “Bonecrusher” recently revealed in an interview to ESPN that he feels Nasrat does not deserve to be in the UFC yet. 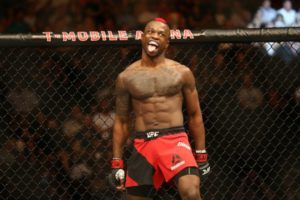 Both fighters are coming into the fight having faced defeats in their previous outings in the octagon. Hence, a victory is certainly extremely crucial to both of them.

Diakiese was recently in a conversation with noted MMA journalist Chamatkar Sandhu of ESPN. During the interview he stated the following about his upcoming opponent:

I feel like he should not be in the UFC yet. If you look at his record, he’s maybe fought twice a year, and some of the guys he’s fought are amateurs. He’s not beat anyone who was undefeated. I took peoples O’s when I was outside the UFC.