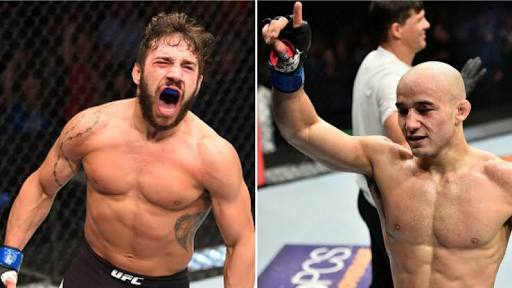 UFC returns to New York with an electrifying card.

They were first slated to fight at UFC 219 on December 30,2017 in Las Vegas.Rivera was expected to face Dominick,however Cruz suffered a broken arm in training and had to pull out of the fight, and he was replaced by John Linekar.On December 24, Lineker pulled out of the fight citing a tooth infection.After a failed negotiation with Moraes in attempt to remain on the card, Rivera announced that he will not compete at the event.

Moraes,a Former World Series of Fighting (WSOF) Bantamweight Champion exploded on to scene when he managed to achieve rank number 5 on the UFC’s bantamweight rankings.Moraes made his debut at UFC 212 on June 3,2017.Moraes suffered a razor thin split decision against Raphael Assansao.Moraes then fought Former Two time Flyweight Title Challenger John Dodson on November,2017 and defeated him via split decision.On just 6 weeks notice,Moraes fought Aljamain ‘Funkmaster’ Sterling and defeated him via KO in the first round to earn Performance of the Night bonus.

This fight may be considered as a virtual title eliminator.However,2018 being the year of superfights,there are talks of Bantamweight Champion TJ Dillashaw going down in weight to Challenge Demetrious ‘Mighty Mouse’ Johnson for the UFC Flyweight Championship of the world and put a hault at his record of most title defenses(eleven)

Other Fights added to the card:

Flyweight bout between Jared ‘The Monkey God’ Brooks(13-1) takes on Hector Sandoval(14-4).A Heavyweight scrap between Walt ‘Big Ticket’ Harris vs Daniel Spitz is also added to the card.Spitz won his last fight vs UFC veteran Anthony Hamilton via KO in the first round.Harris’s last fight went as a loss on his record as he was disqualified when he landed an illegal head kick to his opponent Mark Godbeer at UFC 217.Harris was dominating the fight until then(via Twitter):