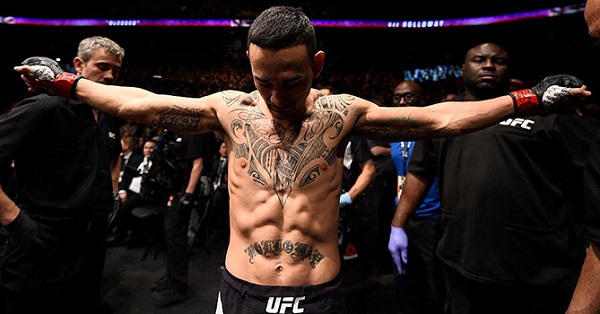 The current UFC featherweight champion, Max Holloway was all scheduled to face former UFC lightweight champion, Frankie Edgar at UFC 222. However, “Blessed” was forced to pull out due to a leg injury. He was then replaced by rising prospect Brian Ortega in the co-main event of UFC 222. It was the first time Holloway had ever pulled out of a fight. He has now come out and revealed how he felt while pulling out of the fight and has also given his opinions about Ortega.

Holloway is now widely expected to face top contender Brian Ortega in his next fight. The featherweight kingpin recently made an appearance at MMA Fighting’s, The MMA Hour. He revealed on the show his feelings about the UFC 222 pull-out and also gave his opinions about Ortega. Here’s what he had to say:

It was difficult, man. It was a tough pill to swallow, for sure, I’ve never, ever pulled out of a fight in my life, not even in my amateur days. And for the first time to be that? So much history was on line.

Things happen though. Things happen for a reason and this injury popped up and it wasn’t my day. It was a tough pill to swallow, man. I was trying to find every single way out of this, trying to talk to the doctors and this and that and figure out a way so we could still go out there and fight, but it wasn’t budging, man. They had the last call, they had the final call — they called it, and it was definitely a hard one.

We’ve got one more doctor’s meeting before everything, in like a month or so, and we’ll see what happens, I don’t know when it is exactly, but that’s what we’re trying to do, we’re trying to get cleared.

The surgery happens if the injury [rehabilitation] won’t hold up, so we’re waiting. The doctor gave us a certain timeline and we’re just playing it by ear now.

Ortega is undefeated for a reason, He’s good. He had knockouts on his record. I thought if he finished [Edgar], it was going to be a submission, because he’s pretty [skilled] there too and he’s super good on the ground. So I thought if it was a finish, it’d guaranteed be a submission. But he went out there and did his thing.

MMA India Exclusive: Arjan Singh Bhullar explains why he is wearing a turban out to his next fight at UFC Glendale, does media rounds in Arizona promoting it

Previous articleMMA India Exclusive: Arjan Singh Bhullar explains why he is wearing a turban out to his next fight at UFC Glendale, does media rounds in Arizona promoting it
Next articleUFC: Dominick Cruz says he could defeat Floyd Mayweather with 1-arm tied behind his back in MMA