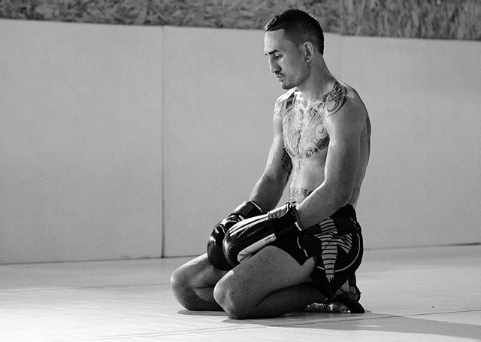 Just when everything seemed back to normal, another hiccup arises for the cursed UFC 223 main event. Max Holloway, the featherweight kingpin is potentially facing the biggest weight cut of his career, revealed his nutritionist George Lockhart. Lockhart is interestingly the nutritionist for his opponent  Khabib Nurmagamedov as well.

Lockhart revealed to MMAfighting.com, about the discussions with Max’s team, just hours before signing the dotted line. Here is an excerpt from his interview

“It was a lot of math, a lot of calculations and a lot of f*cking stress in a short amount of time,” Lockhart said. “I was like, ‘f*ck.’”

“Anybody that follows us and knows what I do, this is tied for the largest weight that I’ve ever done,” Lockhart said.

“This is huge for Max and honestly this would be so easy to say, ‘No, man, he can’t do it’ and it would be no stress on me,” Lockhart said.

“But the kid, I know he wants it. I know Max wants it. He’s actually excited about this shit. He has so much weight to cut, but he was excited. It was like he had a challenge. He’s just like, ‘Let’s do this’ and I’m like, ‘all right.’

It is to be noted if Max doesn’t make the 155 mark, it is no longer a title fight. Khabib had earlier mentioned, that the only reason he chose to face Max on short notice was because it was a title fight.

George Lockhart part of ‘Lockhart and Leith’ is also the nutritionist for UFC strawweight contender Joanna Jedrzejczyk. Joanna had earlier blamed the weight cut for her brutal knockout loss at UFC 217. In any case George Lockhart has his work cut out in the lead up to the weigh-ins.

UFC: Khabib Nurmagomedov believes that Max Holloway is fighting for the money

Previous articleExclusive: MMA India makes an appearance on UFC 223: Embedded
Next articleUFC: Eddie Alvarez reveals why he didn’t step in to replace Tony Ferguson at UFC 223