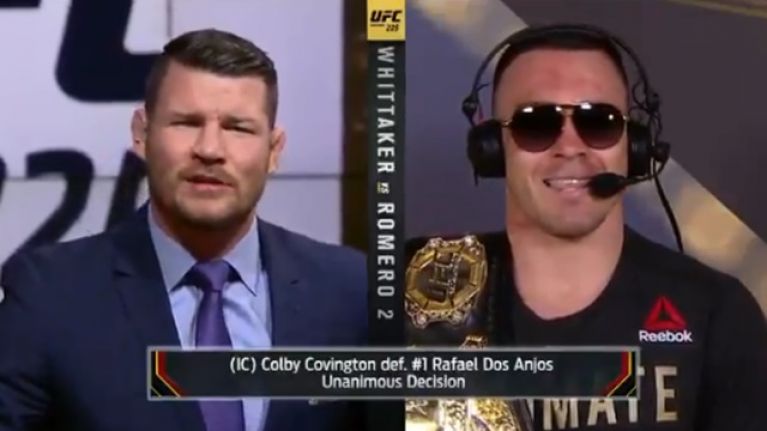 Michael Bisping might be retired now, but he can retain his claim as the best trash talker in the game.

Colby Covington put on a clinic against Rafael Dos Anjos at UFC 225 – and was crowned the new Interim Welterweight Champion. Covington, who is known to be provocative, didn’t hold back on the mic after his splendid performance. 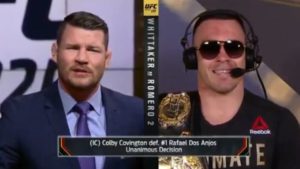 In a post fight interview with the FOX Network team, he took aim at his ‘haters’.

“All my haters in one studio – I appreciate it, guys. What kind of excuses are you going to make for RDA now? What, you gonna say he’s a lightweight? He’s overweight? This and that. We know you’re gonna make excuses; no one’s ever gonna legitimise me.”

Michael Bisping being the wily veteran he is, couldn’t take the ‘dig’ lightly and retaliated in his usual nature.

“No one’s making excuses, Colby. You fought a good fight.

“Why are you so defensive? Why you gotta be a prick? Bisping responded.

“All you guys gave RDA a false sense of security. He was a God. He was unbeatable at 170.”

“I just beat him”

Bisping went onto clarify his position.

“That makes it even better for you, we said it was a great opponent, we just said – I don’t know if you cared to listen, I know you just had a fight, you’ve been hit in the head a few times – but obviously you’re not thinking too straight.

We just said you fought a very, very good fight. If you cared to listen, open your ears and stop talking so much crap for one minute, you might hear that we actually gave you some compliments.”

“Do you have the invite to go to the White House? Or is that just another figment of your imagination like being the champ?”

Here is the full video of their verbal exchanges.

Turn sound on. Grab some popcorn. You're welcome. pic.twitter.com/8q2QxCvXxL

Both Colby Covington and Michael Bisping had their moments, but the UFC has a new star.

UFC: Colby Covington issues ‘unformal apology’ to Joe Rogan, admits that emotions get the better of him

Previous articleUFC: Colby Covington issues ‘unformal apology’ to Joe Rogan, admits that emotions get the better of him
Next articleWWE: Does Braun Strowman think he is stronger than Brock Lesnar?