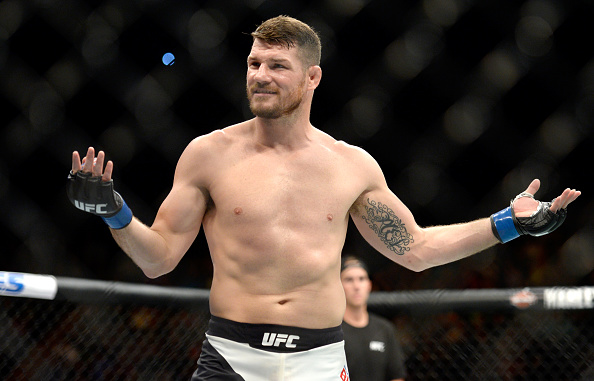 Former UFC Middleweight champion Michael Bisping is at the twilight of his career. The 39-year-old is on a two-fight skid and has been adamant about his plans to retire from the sport.

And now, on the latest edition of his podcast, Bisping noted that he is interested in a retirement fight at UFC Liverpool.

“This is a ‘Believe You Me’ exclusive. UFC, I’m available. If you want me on that card, you’ve got my number.” He said. (H/T MMA Junkie)

UFC Liverpool is currently scheduled to take place on May 27 at the Echo Arena in Liverpool with a Welterweight contest between Darren Till and Stephen Thompson headlining the event. Gunnar Nelson and Neil Magny will also be a major attraction on the card.

“That’s a nice retirement fight. Liverpool. Northwest of England. That’s where I’m from.I am interested in fighting on that card. We’ll see what the UFC comes up with, but yeah, definitely interested, for sure. That would be my last fight.” Bisping added.

Bisping last fought against Kelvin Gastelum at UFC Shanghai and suffered a first-round KO defeat. Prior to this, he suffered a third-round submission defeat to Georges St. Pierre as well.

In talks with UFC officials

The former champion also revealed that he is currently in talks with UFC officials to get the right opponent for him.

“I said to the UFC throw some names my way, and we’ll see. We’ll see what they come back with. But yeah, I’m certainly interested. Definitely interested, so there you go.” He concluded.

Bisping is currently 30-9 in his career and was on a five-fight winning streak before his loss to Georges St. Pierre at UFC 217. A trilogy fight against Luke Rockhold and a rematch with Vitor Belfort were being discussed but Bisping’s reactions to both the potential fights have been lukewarm.