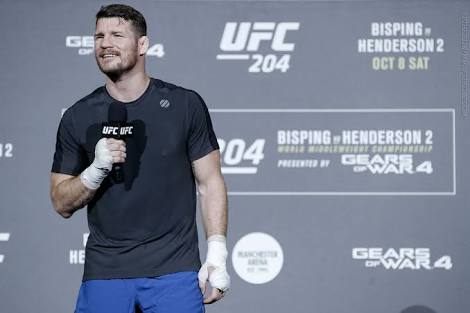 T.J. Dillashaw (16-3 MMA, 12-3 UFC) is the current reigning, defending and undisputed UFC bantamweight champion of the world. Dillashaw, in his UFC tenure, has got his hands on the title not once but twice.

Many attribute Dillashaw’s success to his longtime striking coach and now head coach Duane Ludwig. The bond between Dillashaw and Ludwig is simply special. Dillashaw left his long time team Team Alpha Male where Ludwig was a coach, before Ludwig decided to start his own gym in Colorado. Ludwig, a former UFC veteran, himself agreed that he tries to live vicariously through Dillashaw.

However there is another man who has established his case to be given credit for Dillashaw’s success (in a witty way), Dillashaw’s TUF coach and former UFC middleweight champ Michael ‘The Count’ Bisping.

Dillashaw’s journey, like many fighters including Bisping, started with the TUF house. Dillashaw was a participant on the fourteenth installment of TUF where he was coached by TUF season 3 winner Michael Bisping.

Bisping recalled a moment which he shared with Dillashaw when UFC President Dana White took them out in a plush restaurant. Bisping in the recent episode of his podcast ‘Believe You Me’, claimed that the words of wisdom he imparted fuel Dillashaw’s desire to win the belt.

“I’m not taking credit for Dominick Cruz being the champion, I’m not taking credit for T.J. Dillashaw being the champion of the world right now. OK? I’m not, That’s not what I’m saying”, Bisping said. ” But I did coach him for a while, and I did say to him, at the end of every season, Dana takes everybody out, both teams, all coaches in a real good, high class, very expensive dinner.”

Previous articleUFC: Chael Sonnen absolutely GOES AFTER Jon Jones with a series of brutal one lines after ‘worst trash talker’
Next articleUFC: UFC Fighters put up self defence video to help women from getting Ariana Grande’ed!