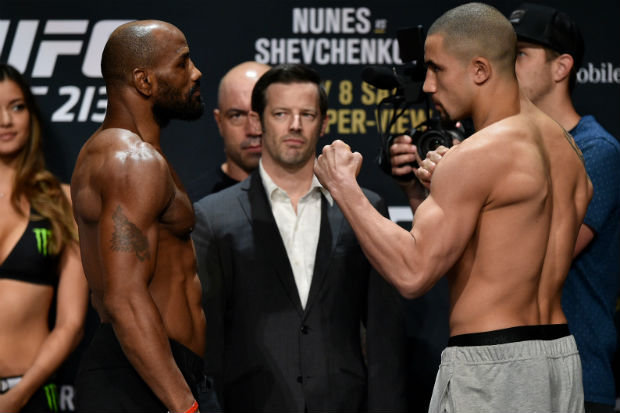 UFC Middleweight Champion is ready for a rematch against Yoel Romero on 9th June at UFC 225 in Chicago,Illinois.(via Twitter):

Robert ‘The Reaper’ Whittaker (19-4) and Yoel ‘Soldier of God’ Romero (13-2) first met at UFC 213 on July 8,2017 for the Interim Middleweight Championship of the world with the Former Champion Michael Bisping being injured.

Romero faced Former UFC Middleweight Champion of the world Chris Weidman on November 12,2016 at the historic UFC 205 held at Madison Square Garden in New York.Romero defeated Weidman via a vicious flying knee KO in the third round.Later in April,Whittaker faced one of the most skilled Jiu Jitsu Practioner of all times in Ronaldo ‘Jacare’ Souza at UFC on Fox 24 in Kansas City,Missouri. Whittaker defeated Souza via TKO in the second round further snapping Jacare’s path towards the title.

At UFC 213,Whittaker defeated Romero to become the UFC Interim Middleweight Champion of the world.Whittaker trashed his knee in the first round itself but stayed committed to his game plan of taking Romero in the further rounds as he is known for his weaker cardio.All the judges gave the first two rounds to Romero and last three to Whittaker.

Then Champion Michael Bisping was slated to fight the Former UFC Welterweight Champion George St-Pierre at UFC 217 in New York.Bisping lost the bout making St-Pierre the fourth fighter in the history of UFC to hold the belts in two weight classes.There were rumours of a unification bout but subsequently, St-Pierre vacated the championship on December 7 and Whittaker was promoted to undisputed champion.

However,Romero missed weight and weighed in at 187.7 lbs,2.7 lbs above the Middleweight Championship limit making him ineligible to fight for the title,but eligible for Rockhold.

First two rounds were just about processing each others,but Romero brutally knocked out Rockhold in the third round.(via YouTube):

Certainly a rematch between Whittaker and Romero would be interesting.