The fact that Nate Diaz didn’t pounce on his newly-established superstar status following his pair of fights against Conor McGregor in 2016 is proof that the Stockton lightweight has a unique perspective on fighting. Most fighters would have struck while the iron was hot and kept the millions rolling in while his cachet was at its highest but Diaz is different and he’s not accepted a fight in almost two years now. 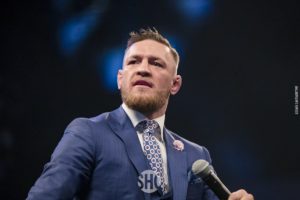 Nate Diaz produced a very interesting tweet in relation to the crazy behavior of Conor McGregor and his team this evening.

McGregor managed to sneak into the Brooklyn venue, got to the loading dock where buses were gathered to transport UFC 223’s fighters back to the hotel and began recklessly attacking the bus which held Russian rival Khabib Nurmagomedov.

The Irishman and his entourage turned up unannounced in Brooklyn for the UFC 223 press conference, causing chaos and attempting to hurl objects at the bus carrying the fighters.

It’s understood that an altercation earlier this week between Nurmagomedov and McGregor’s training partner, Artem Lobov, is what sparked the Irishman’s pursuit of vengeance.

‘The Notorious’ was stripped of the lightweight title ahead of Saturday night’ event, where one of Khabib Nurmagomedov or Max Holloway will become the undisputed champion.

Nurmagomedov escaped uninjured, while Michael Chiesa sustained cuts to his face in the incident and he along with Ray Borg was pulled out of the card.

And Diaz has claimed that Nurmagomedov was to blame for the entire situation as it was he who cornered Lobov in the fighter hotel just a few days ago.

While McGregor’s antics have been condemned by UFC and you’d suspect he’d be in a lot of trouble, Diaz, to the surprise of many, has actually come to the defence of his rival, posting the following  tweet:

He shouldn't have been trying to punk his boy when he was alone, like a bully. Then he expects not to get rolled on fukn rookie..
And then stay on the bus
haha u guys got punked ….

Previous articleUFC: Khabib Nurmagomedov responds to Conor McGregor’s attack on his bus
Next articleWWE: Dara Singh to be inducted into the WWE Hall of Fame