Luke invaded Smith’s house through the garage door that he had left open. Smith pointed out that he lived in a nice neighborhood and it was not uncommon to leave their car doors or garage door open. The invader fought Smith hard and gave him all he could handle.

In a report released earlier, the intruder Luke Haberman is an elite wrestler based out of Nebraska. Smith said that it was one of the toughest of his life. He also admitted that he was terrified. 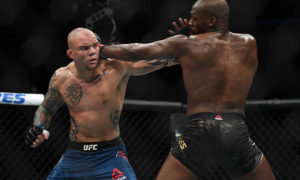 UFC light heavyweight champion Jon Jones weighed in on this issue and said: “glad Anthony is OK, no way dude would have left my house walking.”

Glad Anthony is OK, no way dude would have left my house walking https://t.co/U6wSr8KmA8

🔊 Jon Jones reacted to the news of a home intruder at @lionheartasmith's house. Listen to hear Anthony's response to Jon's tweet. ⬇️⬇️⬇️@RJcliffordMMA pic.twitter.com/WvOPMGsb4k

“What a perfect moment to flex, Jon, in the middle of a disaster like that in my home,” Smith on Sirius XM radio . “What a perfect opportunity to flex at how g*ddamn cool you are. Just when you thought ‘that’s pretty admirable of Jon Jones to reach out and well-wish me,’ and then as you continue reading you’re like ‘oh that’s right, I forgot you’re still a f*cking douchebag.’ It’s just his opportunity to insert himself and make sure everybody knows how cool and bad ass he is. …

“Just for a second I thought you were human and you had a soul and then I realized yo, you’re still the same piece of sh*t you’ve always been. … You’re such a douchebag.”

“First of all, I had a worst-case scenario,” Smith said. “We get it Jon, you’re all over Twitter and Instagram with all your guns and your cool dog, but I got caught. I got caught slipping, worst-case scenario. Guns weren’t close: not typical. Door was open: not typical. I don’t get what he’s getting at. It’s real easy to sit there and go ‘if that guy came to my house I would have just beat the sh*t out of him, I would have done this and that, I would have shot him.’

“It’s really easy to say that until you’re caught in it and you’ve been awake for eight seconds and you’re in the middle of a g*ddamn pandemonium throw down in the middle of your living room with no pants on. Nobody’s ready for that sh*t. It’s real easy to flex on Twitter.” (H/T – MMAFighting.com)

Previous articleUFC vs WWE vs Boxing: Ronda Rousey reveals who pays best!
Next articleUFC News: Shaquille O’Neal reveals exactly how training in MMA has been responsible for his NBA C’ships