UFC lightweight champion Khabib Nurmagomedov is set to defend his title against Tony Ferguson. The fight will be the main event of UFC 249.

The fight will take place at the Barclays Center in Brooklyn, New York on April 18. Ahead of the fight, both fighters had a press conference in Las Vegas last weekend to promote the mega-fight.

Both fighters talked trash about each other. Khabib Nurmagomedov went off at Ferguson and called him a stupid guy. However, he knows that there are limits to how far trash-talking can be taken. 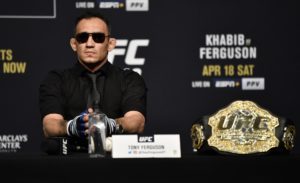 During the UFC 249 press conference, a reporter asked Tony Ferguson about his mental health issues. Tony didn’t like where the question was going and hit the referee with a classic ‘F*** You‘.

“I commend you for going headfirst into some mental health issues and working through that. It takes a lot of courage as a professional athlete, especially as a lot of people look up to you…” the journalist told Tony Ferguson and the former interim champion quickly responded by saying, “F*ck you.”

“I was giving you props. I was just wondering..” said the journalist.

“I wasn’t giving you advice, sir,” the journalist replied back.

Tony Ferguson had lot of troubles relating to mental health problems last year. His wife Cristina Ferguson even filed a restraining order against him and pleaded Ferguson to get medical help regarding his mental health.

Khabib Nurmagomedov made it clear during the Dominance MMA media day that the mental health problems that Tony is dealing with are his personal problems and that should be left alone.

“Honestly, there’s nothing personal here,” Nurmagomedov said. “I don’t want to talk about his problem, like family stuff, mental stuff.

“This is his problem. Leave him alone. I don’t want to talk about him, about his problems.”

“Everybody who sit here, everybody has problems,” Nurmagomedov explained. “Nobody’s safe. If he needs help, we have to help him but we’re going to fight next month. I don’t to think about him, he is my opponent.

Do you guys agree with Khabib Nurmagomedov?