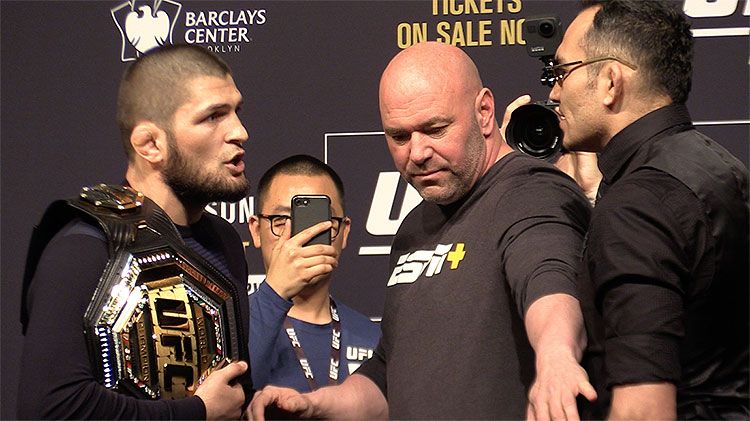 The highly-anticipated showdown between Khabib Nurmagomedov and Tony Ferguson has been cancelled for the fifth time. The lightweight champion announced his withdrawal from the bout on social media and Dana White isn’t surprised by it.

With COVID-19 outbreak infecting over 200,000 people in the US, the originally slated UFC 249 was moved from New York. The UFC is still in active search for a replacement opponent for Tony Ferguson.

However, Khabib Nurmagomedov got stuck in Russia after the travel restrictions were announced.

“Everyone knew he’s not fighting,” Dana White told Kevin Iole of Yahoo! Sports about Nurmagomedov pulling out of his April 18 bout against Tony Ferguson.

Speaking with ESPN’s Brett Okamoto, the reigning lightweight champion said that he is willing to fight at UFC 249, if Dana White sends him location for the bout.

“Right now, if they give me location and I can come out from Russia and I can go to any country,” Nurmagomedov told Brett Okamoto of ESPN. “U.S., Abu Dhabi, doesn’t matter. I’m going to fight, 100 percent. Just give me location. Every day, I send Dana White a message. ‘Hey, where’s my location.’ This is not my mistake.”

“Too many crazy stuff, too many questions and I don’t have answer. I understand people are upset because this fight, this is like a dream fight for fans. This is my dream fight. I lose money, I lose so much money. Nobody lose like I lose. Nobody. I lose so much things. I want to fight.” (H/T – BJPenn.com)

What do you guys think about Dana White’s reaction to Khabib Nurmagomedov pulling out of UFC 249? When do you think UFC will be back and running and putting up fight? Do you guys think that UFC 249 will go ahead amidst the Coronavirus pandemic? Let us know in the comments section below.

Previous articleUFC News: Stephen Thompson reveals which are the two fights he wants next
Next articleFriday Fighter of the Week: Rana Rudra Pratap Singh