UFC News: Daniel Cormier claims commentators would have sat on each side of the Octagon while working UFC 249

UFC 249 which was scheduled to take place at UFC 249 on April 18 was cancelled last week. The event was supposed to be headlined by Tony Ferguson and Justin Gaethje and they were fighting for the interim championship. 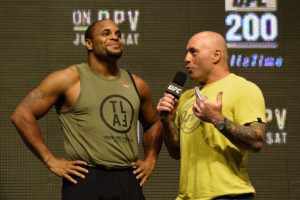 It was announced last week that Justin Gaethje would take on Tony Ferguson on short notice. Dana White had booked the Tachi Palace Casino Resort in Lemoore, California for two months to host UFC 249 and other domestic fights. But after talks with top brass at ESPN and Disney, Dana White had to postpone all its event until further notice.

Daniel Cormier was ready to commentate at UFC 249

Speaking to Ariel Helwani of ESPN, Daniel Cormier said that he was ready to commentate at UFC 249 because of the precautionary measures the promotion had taken. According to Cormier, his fellow commentators John Anik and Joe Rogan would be seating on the different sides of the Octagon.

DC describes what it would have been like to call the UFC 249 fights.#HelwaniShow pic.twitter.com/vfhZdQy6oF

“One of the biggest worries for me was, no one can go with you — like nobody,” Cormier said (via- BJPenn). “They said ‘DC, you’ve got to come along. You’re going to check into the hotel, they’re going to screen you, and make sure you’re ok. Then you’re going to go into the arena, call the fights, then you’re going to leave.’ I mean, in terms of what they were going to try to do to protect us, it was crazy. [Joe] Rogan, myself, and [Jon] Anik — the Octagon has eight sides — we would each be on a different side of the Octagon [rather than side-by-side] just to make sure we were social distancing away from each other.

“By the time I was done with this conversation [with the UFC], I felt like I was almost safer at the event than I am anywhere else because it’s only people that are ok, we’re all away from each other, you go and get paid, and you’re there for a day. I could have drove up Saturday morning, called the fights, drove home Saturday night. It was perfect for me.”

Previous article
UFC News: Read which UFC fighter the Rock just referred to as a ‘dominant beast of a man!’
Next article
WWE has just been branded an ‘essential business’ in Florida, giving hope for the UFC