UFC News: Dominick Cruz confirms that he will not retire after Henry Cejudo loss at UFC 249

Former UFC bantamweight champion Dominick Cruz had a rough night last weekend. He returned to the Octagon after a 40-month layoff at UFC 249 in Jacksonville, Florida.

He fought the defending UFC bantamweight champion Henry Cejudo in the co-main event. In this fight, Cruz was getting outstruck in the opening round with Cejudo’s kicks. However, in the second round, Cruz seemed to have figured out a way to fight Cejudo on the outside.

He was using his lateral movement and elusive footwork that he is known for. But with just 15-seconds remaining in the second round, Cejudo landed a crushing knee of Cruz’s face and dropped him. After this, he landed a barrage of punches and ultimately the referee Keith Peterson intervened to stop the fight. 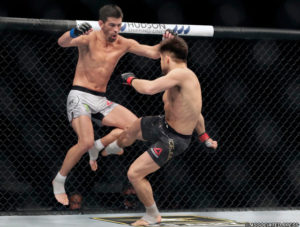 This was Cruz’s first fight in nearly three and a half years and fans are wondering if Cruz would continue fighting. ‘The Dominator’ has now lost two back to back championship fights. Prior to losing to Cejudo last week, he lost to Cody Garbrandt via a unanimous decision at UFC 207.

Dominick Cruz has no plans of retiring

In an email newsletter sent to his fans, Dominick Cruz told his fans that he doesn’t plan on retiring anytime soon. He said that he was back in training for his next fight.

“Yes. I am healthy, I feel lethal and I love it,” Cruz said. “Loss is a part of fighting and I am right back to training, getting my rounds in.”

He also stated that he was slow in the opening round and he should have kept his tempo up right from the beginning. Cruz also made it clear that he hasn’t suffered any injury in the fight.

“Round 1, I really started off slow. I wasn’t firing, I spent too much time feeling it out,” Cruz added. “I learned that in a championship fight I need to keep the pace from the beginning. Every round!” he added.

“I have couple of bumps on my shin but I feel great, healthy and sharp,” Cruz said.

For the first time in his career, Cruz is riding on a two-fight losing streak. Here’s how he describes how it feels to lose:

“The only way I can put it into words is when your GF of 3 years you really love breaks up with you. It’s that awful feeling. Depressing sad. This was three years of my life,” Cruz concluded.