UFC News: Fan asks Khabib to punch him in the stomach…see what happens! 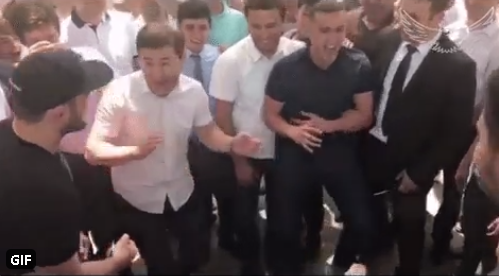 The UFC and MMA, in general, has some of the most passionate fans around the world who can have some of the weirdest requests for their favourite fights and athletes. One such incident recently took place where a fan requested the UFC lightweight champion Khabib The Eagle Nurmagomedov to punch in the stomach.

It should be noted that such incidents have also previously happened before, the former UFC women’s bantamweight champion Miesha Tate had previously revealed that she was once asked by a fan to choke him out. Even the likes of Alistair Overeem have been requested by fans to hit them. 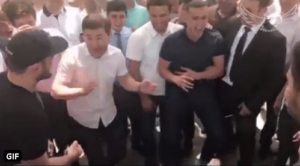 Thus, when a fan asked the Russian to punch him, well, the champion obliged and hit him with a playful hook to the body. You can check out the video in the tweet down below:

Khabib punches ‘crazy fan’ in stomach after being asked to do it (VIDEO) https://t.co/0dDig6UxLF@TeamKhabib pic.twitter.com/aSy7iJx2PF

While Nurmagomedov has time and again refused that a rematch with McGregor is not on the cards, the UFC President Dana White has hinted the opposite. Here’s what White had stated in a previous interview about Nurmagomedov potentially taking on McGregor again, “Come on guys, Conor, look what Conor has done over the last however many years, right?, then he loses to Khabib, in a fight that was you know, when you talk about bad blood, that was like next level of bad blood. Gaethje was on his way up too. We’ve offered Gaethje a lot of fights that Gaethje hasn’t taken either. So, Conor is in line next for this fight if he beats ‘Cowboy’. Because Conor wants to fight three times this year and he’s hoping that if he beats Cowboy, he can turn right around and fight Khabib. That timing and math isn’t going to work out but you know Conor, Conor thinks the way Conor thinks. So his thing is, I’ll fight Cowboy, I’ll beat Cowboy, I’ll be ready to fight Khabib at 155 if anything happens, because we’re going into Khabib-Tony again. So in Conor’s mind, Conor would be ready for that fight. The level of disrespect shown to Cowboy through this whole thing, apparently people forgot, Cowboy’s lost two in a row before and come back and gone on unbelievable runs.”

UFC News: Kevin Lee taps out then tries to continue fighting – and Jorge Masvidal isn’t having it!

Previous articleUFC News: Kevin Lee taps out then tries to continue fighting – and Jorge Masvidal isn’t having it!
Next articleUFC News: Khabib, Henry Cejudo and others answer which is harder, Judo or Wrestling!