UFC News: Here’s how Tony Ferguson reacted to the news of UFC 249 being cancelled! 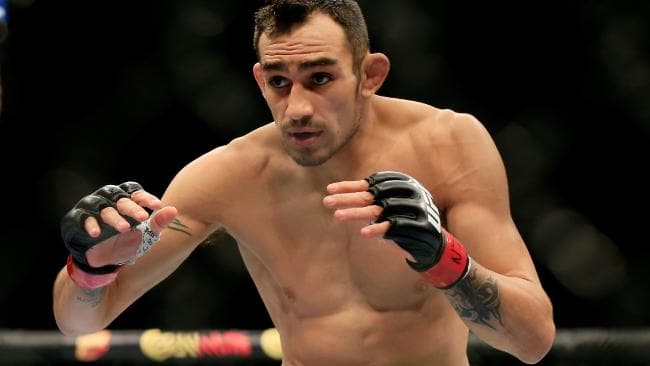 UFC 249 which was scheduled to take place at UFC 249 on April 18 has been cancelled. The event was supposed to be headlined by Tony Ferguson and Justin Gaethje and they were fighting for the interim championship.

It was announced earlier this week that Justin Gaethje would take on Tony Ferguson on short notice. Dana White had booked the Tachi Palace Casino Resort in Lemoore, California for two months to host UFC 249 and other domestic fights.

Tony Ferguson heard about the event cancellation during the middle of the interview. He was being interviewed by Brian Martin of OCRegister when Dana White announced that UFC 249 was cancelled.

Tony Ferguson was shocked at the beginning and the first thing that came out of his mouth was “Oh wow.” Then later went on to say that he was still going to train.

“Ummmm … you know what? I’m sure it’s for a good reason. Let’s be real. I gotta keep the faith,” Ferguson said. “I gotta keep this … (expletive) … keep this small circle close, bro, and just keep focusing on what we can control, which is our heart rate and our breathing.”

Tony Ferguson will continue training and vows to come back stronger

Tony Ferguson who is currently riding on a 12-fight winning streak vowed to continue training and doing what he regularly does. He vowed to come back stronger.

“Dude, I’m just gonna keep collecting trophies and doing my same shit,” Ferguson said. “Every single time I wake up in the morning, when I do my work, say my prayers and I do (stuff), I hug my little boy … whew … kiss my wife. I just … keep doing what I’m doing. What am I gonna do?”

Previous articleUFC News: Rose Namajunas pulled out of UFC 249 because of COVID-19 deaths in family
Next articleUFC News: Jairzinho Rozenstruik’s prediction for Francis Ngannou fight: 1st or 2nd round he goes down!