The highly anticipated match-up between Khabib Nurmagomedov and Tony Ferguson is cancelled for the fifth time. The UFC lightweight champion took to social media to announce his withdrawal from the fight. With Khabib’s withdrawal, fans were wondering if Conor McGregor would step in to save UFC 249.

UFC 249 is scheduled to take place two weeks from now. Originally Khabib was slated to defend his title at UFC 249 at the Barclays Center in Brooklyn. But with the Coronavirus outbreak wreaking havoc around the world, UFC was forced to move the fight from New York. The UFC still doesn’t have a venue for UFC 249. Because of the outbreak, governments around the world have announced strict lockdown measures, and this led to Khabib being stuck in Russia. 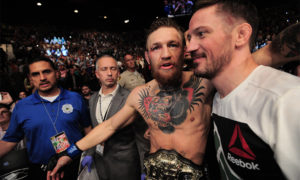 “He always wants to step in. We had a bit of fun on April Fools on that, but no chance of that. Ireland is on a pretty strict lockdown [due to COVID-19]. Me and Conor have no physical interactions. There’s no physical interaction at the gym. Gyms are shut down,” Kavanagh said to ESPN MMA. “To try and rush that together I don’t think would be smart. He certainly isn’t fighting so he has food for the next six months. That’s not where he is in his life. In terms of fun, in terms of fighting and in terms of competition he has all sorts of ideas.” (H/T – BJPenn.com)

Tony Ferguson only wants to fight Khabib or Conor

With Khabib pulling out of the fight, UFC is looking for replacement opponent for Tony Ferguson. There have been talks about Justin Gaethje stepping in at short notice to fight at UFC 249. However, Ferguson has made it clear that he only wants to fight Conor or Khabib. He also blasted Khabib for pulling out of UFC 249 and said that the Russian had decided to pull out a long time ago.

“Khabib, I believe he knew already that he wasn’t going to fight. We scared him. He had the opportunity to come back from Abu Dhabi. He has the power to take a plane and come back. This is the second time we punked him out. I’ve been doing the exact same thing for 8 years. To and from work, going in there and busting my ass, making sure I’m taking care of business. Khabib’s a bitch. I told him I was gonna mop the fucking floor with his hat, the dude jammed out.

“Nobody else deserves that ass whooping (other than) two people: that’s McNuggets and Team Tiramisu. That is Khabib Nurmagomedov and Conor McGregor,” Ferguson said.

Previous articleFriday Fighter of the Week: Rana Rudra Pratap Singh
Next articleUFC News: John Kavanagh to Tony Ferguson: Fight only if you need the money!