UFC News: Jon Jones feels HW move could be easier after being used to ‘much faster’ LHW division

Jon Jones last stepped inside the Octagon back in July at UFC 238 where he defeated Thiago Santos in a close fight.

Jon Jones is without a doubt the most dominating champion in the history of UFC. Standing at 6’4″ tall, the 31-year old champion from Rochester has compiled a record of 24-1 inside the Octagon. Many fight fans already consider Jones to be the greatest of all time. But the New Mexico native believes that to put all doubts to rest and cement his legacy in the GOAT convo he needs to win another title. 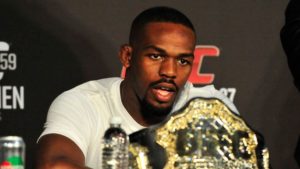 In a recent appearance on First Take, Jones said that he needs to win a title in the heavyweight division. He said that winning a title at heavyweight will put an end to the GOAT conversation.

In order to put the GOAT conversation to rest, @JonnyBones says he's "going to have to maybe obtain a second belt in a different weight class" 🐐 #UFC247 (via @FirstTake) pic.twitter.com/BWNheBcRh1

“In order to put a lot of this pound-for-pound or who’s the greatest conversation to rest, I’m going to have to maybe obtain a second belt in a different weight class. I think that’ll really set me apart from a lot of guys. The move is inevitable. I’m only getting better as a professional. I think I’m at a place, I have the team around me now that can get me to that weight class in a safe and healthy way, I’m excited for when it does happen.” (HT – BJPenn.com)

Jon Jones to move up to heavyweight

Jon Jones has said it numerous times before that he will move up to the heavyweight division. He said that he used to compete with his brothers regularly and believes that he will be okay fighting at that weight class.

“I see nothing but good things. I’ve been competing against my brothers my whole life who are both bigger than me, both Super Bowl champions, and I feel like I’m ready for that lane. Light heavyweight fighters, we are truly the most versatile while being strong, fast and athletic. It’s the most dangerous weight class in my opinion. Guys big enough to knock you out but still more athletic enough and agile enough to do some really extraordinary things. It’s a tough weight class. In a way, me moving up to heavyweight could be easier for me cause I’m just used to a much faster pace of fighting.”

How do you guys think will Jones perform at heavyweight?

Previous articleDominick Reyes, Katlyn Chookagian both willing to give ‘dominant champions’ Jones and Shevchenko immediate rematches if they win
Next articleUFC News: Conor McGregor becomes the first fighter ever to bring 1 million PPV buys to ESPN+