UFC News: Jon Jones urges Anthony Smith to get a gun to defend his family in latest deleted tweet 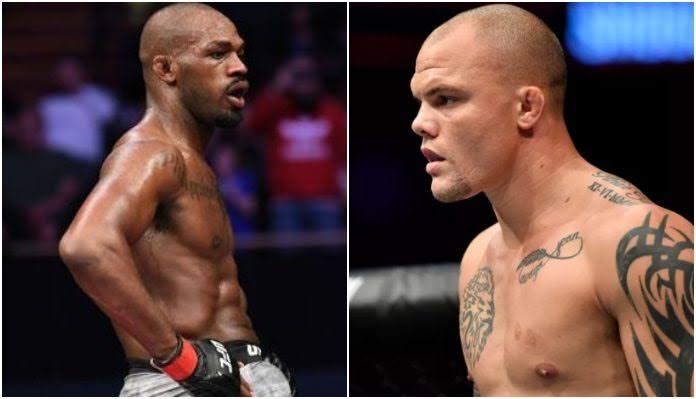 The rivalry between former opponents Jon Jones and Anthony Smith seems to have been reignited.

Recently an intruder invaded Smith’s house in Omaha, Nebraska. Smith though fought off the intruder, he claimed him to be ‘surprisingly strong’ and his ‘toughest fight’ till date.

“I’m not lying when I said it was one of the toughest fights I’ve had in my whole life. I went into that fight ready to die. Nobody smart breaks into a house in the middle of the night unarmed. When they break in at night, it’s to hurt people. No normal human is able to fight like that. I’m by no means the baddest dude on the planet. But he’s a regular Joe and I had a hard time dealing with him. He took every punch, every knee, every elbow. He took every single one of them and kept on fighting me.” 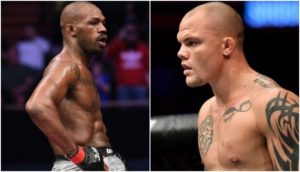 Jones however took to Twitter to have a suggestion of his own. He suggested Smith to buy a gun. The tweet was then deleted immediately. 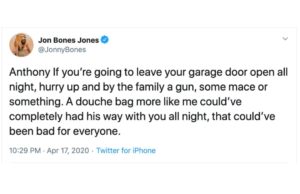 Get your screenshots, here comes the delete 🔥

This is my favorite part

2020 message sending. Leave something up for five minutes and let social media do the work for you.

“Anthony If you’re going to leave your garage door open all night, hurry up and (buy) the family a gun, some mace or something,” Jones wrote. “A douche bag more like me could’ve completely had his way with you all night, that could’ve been bad for everyone.”

Minutes after the tweet, Jones told Twitter “Get your screenshots, here comes the delete,” followed by “This is my favorite part.”

Shortly after Smith opened up about the incident, Jones commented that he would have beaten the intruder worse had it happened to him.  In an interview with Sirius XM, Smith responded to Jones, calling him a “(expletive) douche bag.” This incited Friday’s tweet from Jones.

Jones fought Smith for the title at UFC 235 back in March 2019. He was able to get a lopsided unanimous decision. Surprisingly there was no bad blood when they fought. Jones rather mentioned in his octagon interview, that it was refreshing for him to fight someone without any trash talk. Thus Jones’ comments came as a shock across the MMA community.