UFC News: Ronda Rousey calls herself the GOAT; says she doesn’t have to prove anything to anybody

Ronda Rousey is one of the pioneers of women’s MMA. The women’s division in the UFC took off after Ronda Rousey signed with the promotion.

Very soon Ronda’s popularity begun to sore and she became a superstar in the world of Mixed Martial Arts. Her PPV numbers went off the chart.

As high was her meteoritic rise in the UFC, so was her fall. She lost her UFC title in 2015 at UFC 193 in Melbourne. Ronda Rousey was knocked out in the second round via a head kick. 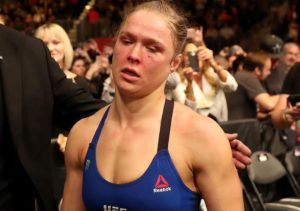 Ultimately her last fight in the UFC was against Amanda Nunes at UFC 207. She was knocked out in just 48-seconds by the Brazilian star. Ever since her loss at UFC 207, she wasn’t seen fighting in the octagon again.

She made a transition to WWE and had a few movie and TV show roles. She also got married to fellow UFC fighter Travis Browne.

Ronda Rousey has no plans of returning to the UFC

Fans have often wondered if Ronda Rousey will ever return to the Octagon again. She posted a video on her Youtube channel along with celebrity stunt performer Steve-O. During the conversation, she revealed that she has no plans of ever competing inside the octagon.

“There’s not a day that goes by that people aren’t telling me to fight,” Rousey said. “I have to try and think of it as, ‘Would I rather be the greatest of all time, or have everybody think I’m the greatest of all time?’ It used to be so important to me to have both. But now it’s got to the point where I don’t want to sacrifice myself and my family to prove that anymore to a bunch of people that don’t give a (expletive) about me.

“I know, and the people who love me know (what I’ve accomplished). It’s no longer a priority in my life. All the people that tell you, ‘Come on, fight again! Do this again.’ They would never do that for me.”

“That’s something I really had to deal with stepping away from the UFC, was finding my identity without it, because I got so lost in it,” Rousey said. “It’s tough, because you’re with these people and you’re like, ‘Oh my God, I got to live this journey with you. This is amazing.’ Then you see some of these Bellator fights and you’re like, ‘Oh my God, this person’s still going?’ I can’t watch it. It makes me sad.” (H/T – MMA Junkie)