With the UFC London card being moved to the US and Leon Edwards pulling out of the fight, UFC is looking for a replacement. Leon Edwards was scheduled to fight Tyron Woodley at the O2 Arena in London this weekend. But the Briton had to pull out following the Coronavirus scare. Now Colby Covington has issued a call out to Tyron Woodley.

With Covington calling out Woodley, fans are confident that they will be able to see a quality match-up this weekend. Both fighters genuinely hate each other and have trash-talked about each other for quite some time now. 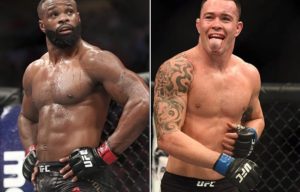 Covington took to Twitter to call out Tyron Woodley.

Word on the street is @LeonScott is out. The @ufc and America need a hero. Who wants see America’s Champ put the #MAGA cape on and beat the fuck out of @twooodley live on @ESPN next week for your entertainment and my own personal pleasure? 🇺🇸🦅🇺🇸

America’s Champ has let the @ufc know he’s available to #KAG and slap the shit out of @twooodley live on @espn for the people! Someone let Tyrone know. That dip shit has me blocked on all platforms because my words “hurt his precious little feelings.” 🇺🇸🦅🇺🇸

Tyron Woodley made it clear that he is fighting this weekend and is ready to take on Colby Covington.

”There’s a lotta people out there that are just straight clout chasing, attention-seeking bitches,” Woodley said. “Colby, you a bitch. Don’t ever open your f**king mouth … He put all this s**t on the internet about him wanting to fight me and I said yes immediately. That’s the fight that made the most sense anyway. That’s the fight I was supposed to get before Leon Edwards and they said he couldn’t fight because of his jaw. The second they booked the fight with me and Leon, now all of a sudden his jaw is healthy, he can fight. He a bitch, he want attention, he dodged me four f**king times so I didn’t even want to talk about Colby, he’s a f**king bitch, he scared.”

”Colby Covington is my number one choice,” he continued. “My number one choice. If I can fight him, Lord, there is a heaven above. When they try to make things for my evil, they make things for my good. This will be my delight. Go on his page and call him out. He’ll probably deactivate his account cuz he a little hoe. Call him out: ‘You talked all that s**t. Tyron Woodley said let’s go.’ You want to fight this weekend? You wanna fight in Oregon, Florida, wherever you wanna fight? Let’s do it. Since you all ‘anybody, everybody, all the time.’ Get on his s**t, get on his line, tell him to fight me and quit being a little bitch.”

”So Colby Covington, wherever the f**k you at: you a bitch, you a hoe, you a clout chaser, you don’t wanna fight for real, you wanna fake like you wanna fight. And now I’m gonna call your ass out. I let you rattle your mouth cuz you knew I wasn’t going to say nothing, I wouldn’t give you attention. But now it’s time to go.” (H/T – MMA Mania)

UFC News: Leon Edwards pulls out of his fight against Tyron Woodley

Previous articleUFC News: Colby Covington ready to step in to fight Tyron Woodley on short notice
Next articleStamp of Excellence: Sky’s the limit for ONE Warrior Series graduate Stamp Fairtex