The Bantamweight division in the UFC is in a good place nowadays with the likes of Jimmie Rivera and Dominick Cruz all contending for TJ Dillashaw’s Title.

In fact, Rivera was slated to fight Cruz at UFC 219, before the latter pulled out of the fight due to a broken arm. Neither of them has since been rebooked as Rivera refused to take another fight at the event and Cruz was rehabbing his arm.

However 2 months on, it would seem that Cruz’s arm has healed sufficiently for him to call out TJ Dillashaw for a rematch. If you recall, Cruz made a triumphant return from a host of injuries that had plagued him in January of 2016 to win the Bantamweight belt from Dillashaw, who was also Champion then.

However, one Twitter user wasn’t best pleased with Cruz’s overtures towards the Title and asked him to ‘earn his spot’ by facing Jimmie Rivera, to which the New Jersey fighter replied with a barbed comment that Cruz wouldn’t fight him because he can’t box. 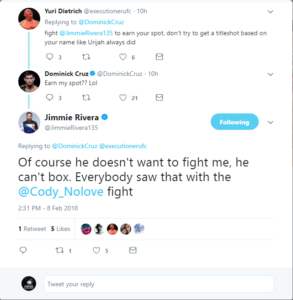 It remains to be seen how Dominick Cruz, who hardly allows anyone to get the better of him in verbal warfare, would reply to this and how the UFC will seek to navigate the situation at the top of the Bantamweight division.

Champion TJ Dillashaw is clearly angling for the Demetrious Johnson super fight at UFC 226 in July, while other contenders like Cody Garbrandt and Dominick Cruz are all lobbying for a Title shot.

And with Jimmie Rivera also throwing his name into the mix, it promises to be an eventful year ahead for the division and the onlooking fans.

Previous articleMeet “The Last Stylebender”
Next articleUFC Roundup: Who said what? (2/9/2018)