One of the most anticipated strawweight title fights between Weili Zhang and Joanna Jedrzejczyk will take place this weekend. The fight will take at the T-Mobile Arena in Las Vegas and will serve as the co-main event for UFC 248.

This is Joanna Jedrzejcyzk chance to regain her title which she lost to Rose Namajunas at UFC 217. She had the chance to claim her title again at UFC 223, but that time she was defeated via UD. 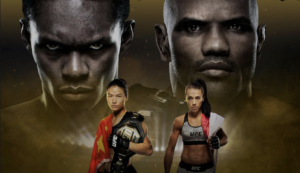 Ahead of the fight, Weili Zhang is unsure if the former strawweight champion Joanna will be able to make weight. Zhang believes that Joanna will miss weight because of her plastic surgery.

The plastic surgery which Zhang is referring to here is of the breast augmentation that Joanna underwent last year. Joanna has also had problems making weight in her last fight against Michelle Waterson at UFC Tampa.

Weili won her title at UFC Fight Night 158 in august last year after she knocked out Jessica Andrade in the first round itself. The fight took place in Shenzhen. She is riding on a 20-fight winning streak. Jedrzejcyzk is one of the greatest women’s flyweight fighter and she is coming off of a dominant victory over Michelle Waterson at UFC Fight Night 161.

The latest plastic surgery comment definitely came has a dig towards Joanna. The former strawweight champion has previously made jokes regarding the coronavirus situation in China. Joanna posted an image on her Instagram story which showed her wearing a chemical protective mask next to Zhang.

This didn’t sit well with Weili, who immediately fired back at her.

“To make fun of tragedy is a true sign of ones character. People are dying, someones father, someones mother, someones child. Say what you want about me if it makes you feel stronger but do not joke about what’s happening here. I wish you good health until March 7th. I will see you soon,” Zhang posted on Instagram.

Jedrzejczyk later took to Instagram where she posted an apology video.

“Hey champ. Hey Weili. So sorry to make you feel bad, but I would never make fun of people with an illness or virus. I didn’t want you to get offended, but I just made fun of the funny internet meme. So, so sorry, but still, I will see you March 7th and don’t get emotional, OK?” Joanna posted on her Instagram story.