UFC: Nicco Montano feels no pressure ahead of UFC 228

UFC women’s flyweight champion Nicco Montano is just a week away from the biggest fight of her life at UFC 228 when she squares off against Valentina Shevchenko.

She will step into the Octagon after nine long months of layoff after she had won the inaugural UFC flyweight title against Roxanne Modafferi last December at TUF 26 Finale.

She has been suffering from health problems which kept her out of action for such a long time, for which she received massive criticism from MMA fans around the world. 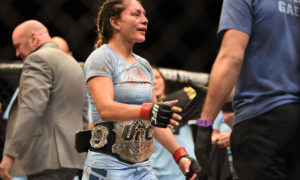 On UFC 228 media call, she told the reporters that,” My health was my main issue, After I got off the ‘TUF’ show I had to deal with a number of health issues. After my fight with (Roxanne Modafferi), I was in a boot dealing with a chronic bacterial infection, and that’s when Valentina chose to call me out. Everybody thought I was just hanging out at home when I was literally having a viral infection throughout my entire body hindering me from spending more than two days a week at practice.”

Nearly after a nine-month layoff, she will be stepping inside the Octagon as the underdog, but she feels no pressure ahead of her fight against Valentina Shevchenko.

“I plan on her being the best she can be the night of the fight,” Montano said. “I’m not focusing on how she’s lost fights. I’m not taking note at what she’s good at. I’m taking notes on what I’m great at, and I’ll be able to capitalize on timing.”

UFC 228 is headlined by Tyrone Woodley and Darren Till and will take place at the American Airlines Center at Dallas, Texas.

Previous articleINVICTA: Helen Peralta says she can’t afford to lose at Invicta FC 31
Next articleUFC: Tyron Woodley points out his advantages in his fight against Darren Till