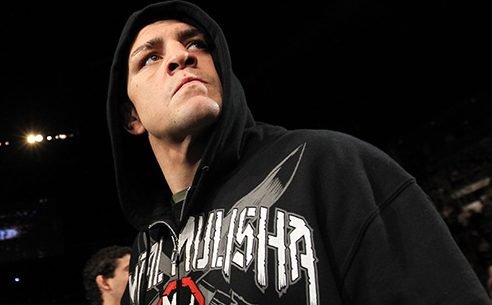 The victim is allegedly a female. Sources told MMAJunkie, that 12 units were dispatched to the crime scene at 7:20 pm Pacific Time. The victim was transported to a local hospital and the cops took a ‘combative’ Nick Diaz into custody.

Diaz’s bail is reportedly set at 18,000$ and cannot post for bail until Saturday, after his court hearing.

This news comes after his younger brother Nate Diaz got into a backstage scuffle last week with fellow UFC fighter Clay Guida. He is being currently investigated by the Sacremento, California Police department for alleged assault. 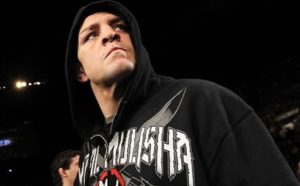 His friend and representative Matt Staudt, came out in the star’s defense. He claims Nick Diaz is being framed by a ‘deranged’ stalker.

”If it wasn’t clear, I’ve got this guys back if he needs me always and completely. One of the best people I know, and that’s the truth, he just plays by his rules, views the world very differently than most and has been fucked constantly. Seeing how everything evolved here infuriates me. The news is out so better to address than not, and for my own sake, not really on his behalf. I’ve seen drunk guys get in Nick’s face and avoid serious injury because he’s a martial artist and a killer but knows that and he’s passed the point of needing to prove it. He doesn’t even act tough to people… There is no scenario where Nick would put his hands on anyone unless it was necessary self-defense, and then watch the fuck out. Moving on, the girl who is accusing him is the most deranged and insane I’ve met to date. She has been obsessed with and stalked Nick for maybe 2 years now. Suicide attempts, calls to his family from fake numbers, thousand of calls a day – yes thousands, showing up everywhere he goes following his story… He changed his number to get away but Vegas is small and they crossed paths again. She left their interaction feeling some type of way yesterday and put in a fake report to get even and have him arrested which she’s threatened to do many times before as well. I can’t even fully digest this whole thing because of how insane and wrong it is. If Nick’s at fault it is because he has chosen again and again and again not to make a police report against her like I’ve advised profusely in the past when she has hit him or broke his phone or broke into his place or stolen things from him or threatened suicide, etc. Everyone is going to think what they think when they see the news so it’s very important for me to at least put something out that is actually factual. #fakenews ”

The UFC were quick to release their statement.

“UFC is aware of the recent arrest of middleweight athlete, Nick Diaz.

“The organisation does not tolerate domestic violence and requires all athletes to adhere to the UFC Fighter Conduct Policy.

“Every athlete is deserving of due process and this situation, as with any official allegations, will be duly reviewed and thoroughly investigated by an independent party.”

If allegations are true, this will be a serious dent on Nick Diaz’s image and professional career. Nick Diaz, who has been out of action since 2015 – was only cleared to fight in the UFC, last month.