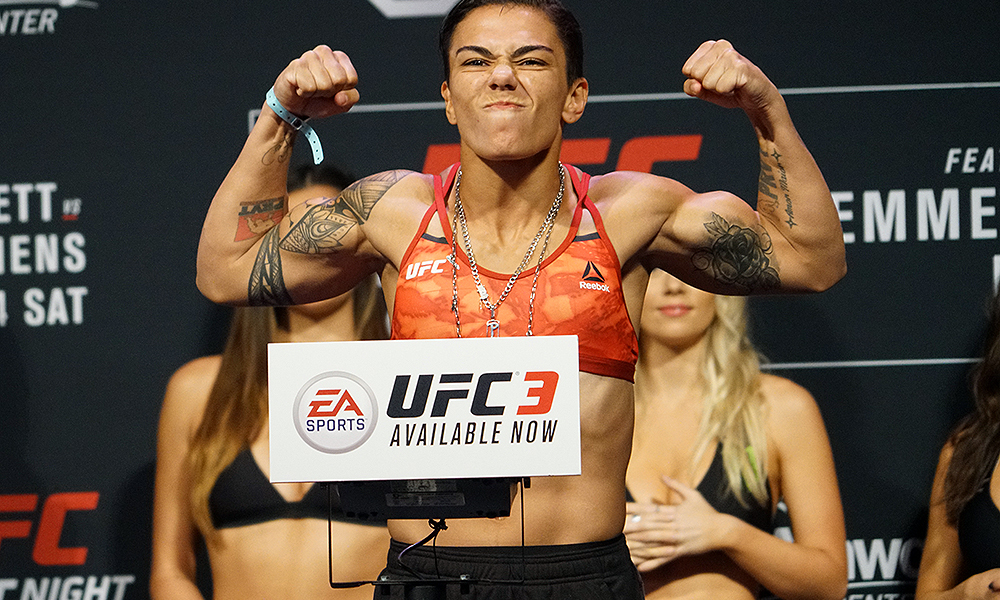 If rumours are to be believed then we are on the verge of witnessing probably the first super-fight in the history of women’s MMA. There has been a lot of hearsay that the UFC women’s bantamweight champion, Amanda Nunes will soon be facing the UFC women’s featherweight champion, Cris Cyborg. This is quite an interesting match-up as both these women have sensational striking skills with pure one-punch knock-out power. Fans and pundits alike have been speculating about the potential outcome of their rumoured bout. UFC strawweight Jessica Andrade recently gave her two cents on the outcome and she believes that Cyborg will destroy Nunes in their bout. She also revealed some details about her beef with Nunes and how she wants to extract revenge on her girlfriend and fellow UFC strawweight, Nina Ansaroff.

Andrade has a MMA record of 18-6 and is currently on a two fight win streak. She last fought and defeated Tecia Torres at UFC on FOX 28 via unanimous decision.

Andrade recently did an interview with AG Fight. During the interview, she revealed that she was aggravated by the fact that Nunes whom she considered her friend, was supporting her opponent Torres. She also went ahead and said that by taking up a fight against Cyborg, Nunes has bitten off more than what she can chew. Here’s what she had to say:

“I could see Amanda cheering for Tecia, in English, during my fight. The fight started and I heard she (Torres) had Raquel Pennington in her corner, but there was another voice over there. When I looked at the Octagon’s side, it was Amanda Nunes. So I was like ‘Oh, okay, she’s cheering for her’. I don’t care, but she’s a champion, she needs to lead by example and get a hold of herself. She knows me. I’m her friend, or at least I thought she was.

She was yelling the whole fight. If you’re going to cheer against someone from your own country, at least contain yourself. Tecia took my back and she (Amanda) stood up. When I reversed the position, she got mad. I don’t intend to fight her. Amanda will fight Cyborg and she’ll get what’s coming to her. I’m sad to know there are Brazilians who don’t cheer for me. Her woman (Nina Ansaroff) is in my weight class, maybe we’ll meet some time and maybe I’ll take it out on her.

I think Amanda got ahead of herself when she asked for the Cyborg fight. She could’ve asked for the strawweight champion, who’s not a Brazilian. She could win two belts and would still be quite the accomplishment. But no, she wanted to fight Cyborg. You might have confidence and want to fight the best, but I think she messed up big time. I was pissed off when I heard about it. I’m huge fan of Cris’. It’s horrible to have two Brazilians fighting each other, but it’ll be good for Amanda to have her ass kicked and be put back in her place by Cris.”

Previous articleWWE: Ronda Rousey to use Judo inside the WWE ring
Next articleUFC 222: Fight Motion