Top UFC prospect Israel Adesanya and the young up-and-coming Marvin Vettori have been booked to face each other at UFC on Fox 29. The news was first broken by MMA Junkie. The pair will lock horns with each other in a middleweight bout in Arizona. 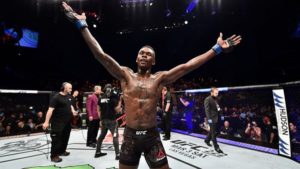 Israel Adesanya is particularly a stupendous striker with remarkable stand-up skills. He is a former professional boxer with a record of 5-1 and a kick-boxer with a record of 50-5-2. He is currently ranked #6 in world middleweight Kickboxing rankings by Combat Press. However, he is still relatively young in his MMA career with just twelve professional bouts under his name. “The Last Stylebender” made his octagon debut at UFC 221 against Rob Wilkinson and won the fight via TKO in the second round due to knees and punches. He is currently undefeated in his MMA career and has finished all of his opponents via knockout.

On the other hand, Vettori is a young 24 year old prospect with adept grappling skills. The Italian possesses a MMA record of 12-3-1. He is currently a black belt in BJJ and regularly trains for Wrestling with MMA legend, Mark Munoz. He has had four fights in the UFC so far and has an octagon record of 2-1-1.

There had been a lot of hearsay regarding these two up-and-coming prospects facing each other. The Jackson-Wink MMA prodigy had even posted a tweet, indirectly calling out Adesanya. The rumours have now turned out to be true as it has been made official by the UFC that the pair will be locking horns at UFC Arizona. 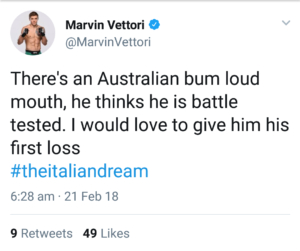 This is an interesting match-up between two of the best middleweight prospects in the UFC. Both these fighters are polar opposites, one being a stupendous striker while the other is a submission wizard. This fight will test the mettle of both these relative newcomers.

As for the UFC on Fox 29 fight card, it’s surely exceeding everyone’s expectations. Below is the list of fights that have been confirmed for the event:

UFC: Cris Cyborg hopes to fight Amanda Nunes in a super-fight at UFC 226