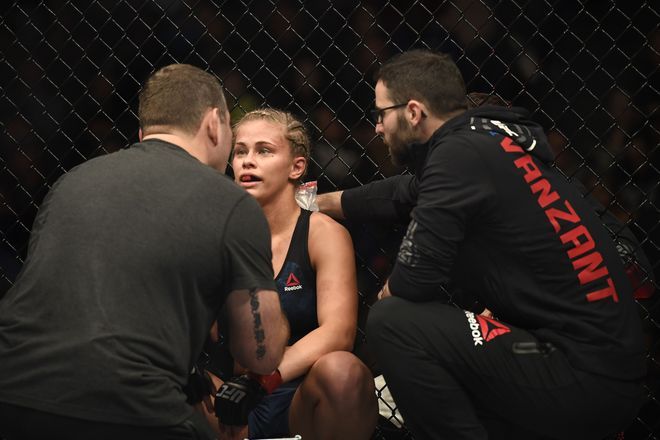 UFC star Paige Van Zant is still nursing a broken arm that she suffered during her unanimous decision defeat against Jessica Rose-Clark at UFC Fight Night 124. With three losses in her last four fights, it’s not the best patch of form for Paige but she is eager to bounce back.

In an interview with TMZ, Paige revealed that she is six months away from making her octagon return.

“I have a plate and seven screws in there – it’s still broken. Three months until I’m back punching with my right hand. Six months – I know I’ll have a fight in six months, and that’s guaranteed. I’m working with the UFC. I’m keeping myself in amazing shape, so all it is is working on my right,” she said.

Prior to her showdown with Jessica, which also was Paige’s debut in the Flyweight division, she was 4-2 in the Strawweight division and had won two fight night bonuses. Her journey to the title was, however, derailed when she suffered defeats to current champion Rose Namajunas and Michelle Waterson.

With a point to prove, Paige is hoping to knock out people when she comes back into the cage.

“I’m really excited to get back in there. I’m staying in good shape, and I’m going to be knocking people out. I feel like I’m still in that title contention spot in the 125 division. I know everybody calls me out, so we’ll just pick somebody from the list and take ’em out.” She added.

The 23-year-old Paige is 7-4 in her career and her fight with Jessica was her first fight in almost two years. Paige had recently announced her engagement to Austin Vanderford and this is expected to keep her busy while she completes her recovery from the arm injury.