UFC: Relive the fight a year ago when Josh Emmett set the UFC record for most number of knockdowns in a round 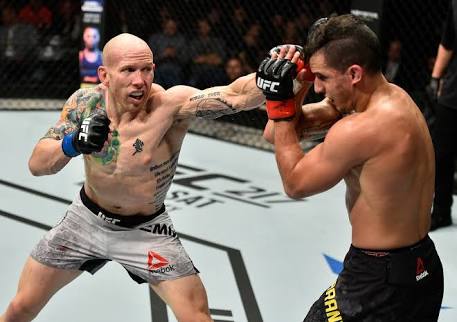 Team Alpha Male prospect and #8 ranked UFC featherweight Josh Emmett (13-2 MMA, 4-2 UFC) is currently recovering from a series of gruesome injuries leaving him with six fractures. Hoping to return back in December, Emmett reflects back to one of his best performances that got him in the history books.

A year ago at Fight Night 118, Emmett took on veteran Felipe Arantes in Gdansk, Poland. The bout also marked as the featherweight debut of Emmett coming lightweight. Emmett was expected to be the stronger man and he didn’t disappoint. Contrary to his wrestling background, Emmett displayed a striking clinic to drop his opponent for as much as four times in a single round for a UFC record. Emmett broke the record previously held by the likes of Gray Maynard, Matheus Nicolau and none other than double champ Conor McGregor for three knockdowns in a single round. This also marked the first 10-7 round scored by the judges in the history of the UFC. (via Instagram):

The victory had Emmett on the radar of matchmakers, which further earned him a short notice fight against a highly ranked Ricardo Lamas. Emmett, however, didn’t play the knockdown game and put Lamas to sleep in the first round thus busting into contention.

The victory also had Emmett on the second spot on the list of most knockdowns in a single fight after Jeremy Stephens (five) at UFC 215 and Forrest Petz (five) at UFC Fight Night 6.