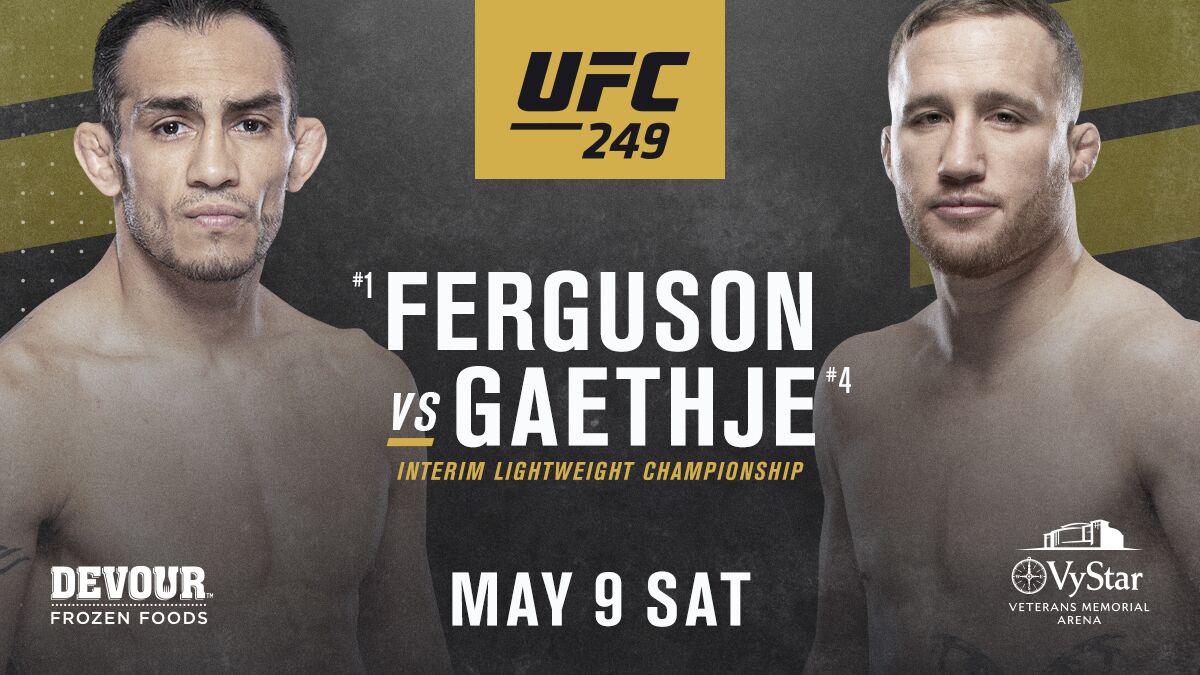 UFC 249: FERGUSON vs. GAETHJE will take place Saturday, May 9 at VyStar Veterans Memorial Arena in Jacksonville, Fla. All prelim bouts will be simulcast on ESPN, ESPN Deportes and ESPN+ in English and Spanish beginning at 6:30 p.m. ET with the UFC Fight Pass prelims. The prelims will continue exclusively on ESPN & ESPN+ 8 p.m. ET and the ESPN+ Pay-Per-View main card will kick off at 10 p.m. ET.

“I can’t wait to deliver some great fights for the fans, “said UFC President Dana White. “I want to give a big thanks to Mayor Curry, VyStar Veterans Memorial Arena and Florida State Boxing Commission Executive Director Patrick Cunningham for getting this thing done and giving us a venue to put on these incredible cards, as well our media partners including ESPN and ESPN+, for bringing it to fans. My team is ready to go and the fighters are excited to get back in there with these back-to-back events.” 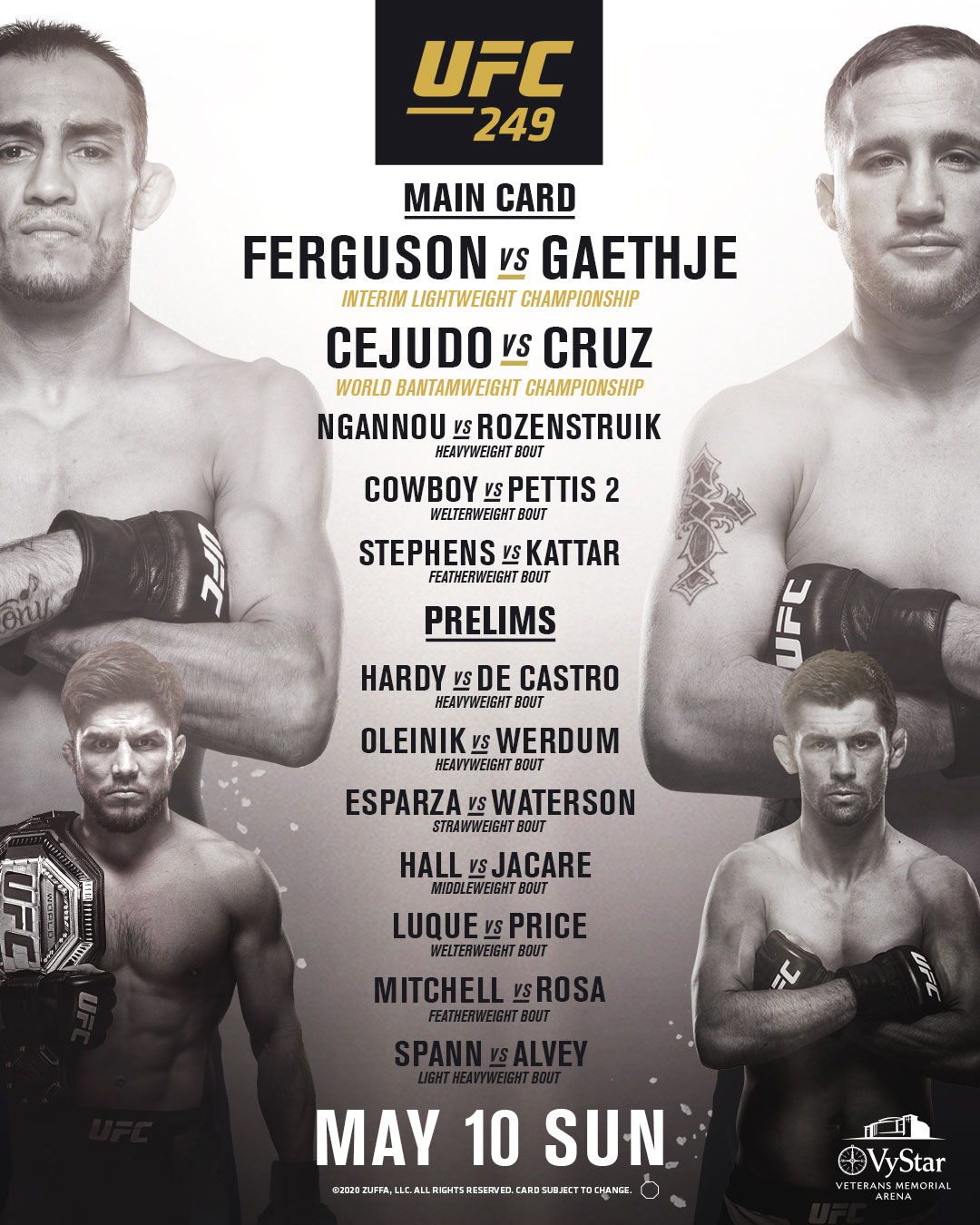 “As we move step-by-step on the path toward economic recovery, we are proud to host these UFC at the Vystar Veterans Memorial Arena,” said Jacksonville Mayor Lenny Curry. “The UFC organization is a renowned entertainment brand that’s presented a safe and sensible plan to use this Jacksonville location, and we are thrilled to have our city highlighted nationally on ESPN and ESPN+. With Jacksonville continuing to outpace other cities and regions, we are excited to continue to lead as host to these world- class, international sports entertainment organizations.”

“Florida’s State Commission and the Department of Business and Professional Regulation have been in continued coordination with the Ultimate Fighting Championship (UFC) to identify options for bringing the UFC to Florida for upcoming events,” said Florida State Boxing Commission Executive Director, Patrick Cunningham. “Florida welcomes the UFC to the Sunshine State, and our commission stands ready to sanction the events to be held on May 9, 13 and 16. Health and safety protocols will be in place to ensure the safety and wellbeing of all individuals who are helping to make these events possible. With this triple date feature of UFC events coming in May, Florida is continuing to build a strong collaboration with UFC that sets the foundation for more opportunities that we hope UFC will choose to host in our state in the months to come.”

One of the most exciting and unpredictable athletes on the roster, Ferguson (26-3, fighting out of Orange County, Calif.) is on the verge of becoming the first two-time interim lightweight champion in UFC history. Currently on an incredible 12-fight winning streak, Ferguson has defeated the likes of Donald Cerrone, Anthony Pettis and Rafael Dos Anjos. He now looks to notch his record-setting 13th win in a row and raise UFC gold once again.

Known for his unrelenting fight style, Gaethje (21-2, fighting out of Arvada, Colo.) has earned a post- fight bonus in every single one of his UFC bouts. One of the best knockout artists in the division’s history, Gaethje has earned stoppage wins over Donald Cerrone, Edson Barboza and James Vick. He now looks to secure another iconic finish and earn his first UFC championship.

Cejudo (15-2, fighting out of Phoenix, Ariz.) is one of only four athletes in UFC history to hold two championships at the same time. To accomplish this feat, he netted impressive victories Demetrious Johnson, TJ Dillashaw and Marlon Moraes. After recently relinquishing the flyweight belt, Cejudo now plans to reassert his dominance over the bantamweight division by taking out one of its greatest champions.

Returning to action for the first time in three years, Cruz (22-2, fighting out of San Diego, Calif.) intends to prove that he is still the best bantamweight in the world. A former UFC and WEC champion, Cruz

holds wins over Urijah Faber, TJ Dillashaw and Demetrious Johnson. He now looks to be the first person to defeat Cejudo at 135-pounds and regain his lost crown.

Additional bouts on the card include: • No. 2 ranked heavyweight contender Francis Ngannou (14-3, fighting out of Paris, France by

way of Batie, Cameroon) meets No. 6 Jairzinho Rozenstruik (10-0, fighting out of Paramaribo, Suriname) in a battle of KO artists