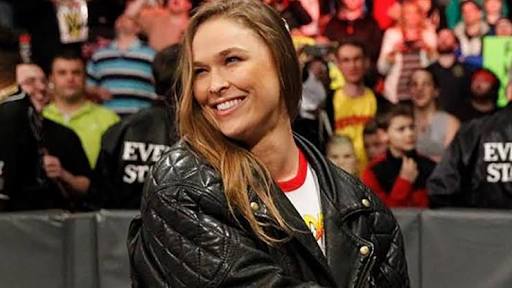 Women’s MMA pioneer and former UFC Bantamweight champion Ronda ‘Rowdy’ Rousey gave the fight fans a tiny ray of hope when she recently had a chat with Mike Golic where she mentioned a possibility of fighting again.

Ronda Rousey is now a full time pro wrestler at ‘Monday Night Raw’.Rousey is finally finding her groove in he WWE especially dealing with the mic.Rousey made her first official WWE appearance at a WWE special in ‘Elimination. chamber’.Even though her entry was savage which unded with her slamming Triple H on a table,Rousey looked nervous while speaking which is important in WWE.

When asked directly whether she would would fight again,Rousey said “I don’t know”.Rousey however in her appearance at the Ellen show said that she would compete in Judo again than in the UFC.

When asked how does Professional Wrestling differ from MMA she said,”It’s a lot different, it’s much more grueling in that I don’t really have to think about peaking my body as much,” Rousey said. “It’s more about my performance, that matters more than anything else so I can be a lot rougher on my body than I would be able to during a fight camp.”

When asked about the challenges she is facing inside the WWE ring she said,”I definitely have a lot to prove.This business is so important to so many people and they had every reason to be suspicious of me just coming in for a cash grab or some attention or whatever, which is not the case.But it will only take time and being consistent and showing people that I’m putting in the hard work everyday for them to be able to entrust me with something they care so much about.”

When asked the million dollar question that will Floyd Mayweather make his transition from Boxing to MMA Rousey said,”Yeah, that’ll never happen.It’ll never happen. It’s all talk.Different strokes for different folks, but I don’t think he’d do well in MMA at all.”(via YouTube):

Previous articleUFC: Evan Dunham claims Conor McGregor will be back this year
Next articleBoxing: Amir Khan hires Joe Goossen as his new trainer